Watch all the Best Web Series in Hindi that are exceptional pieces of content and have been accepted by the audience in recent times. Here are 15 Top Recommendations! 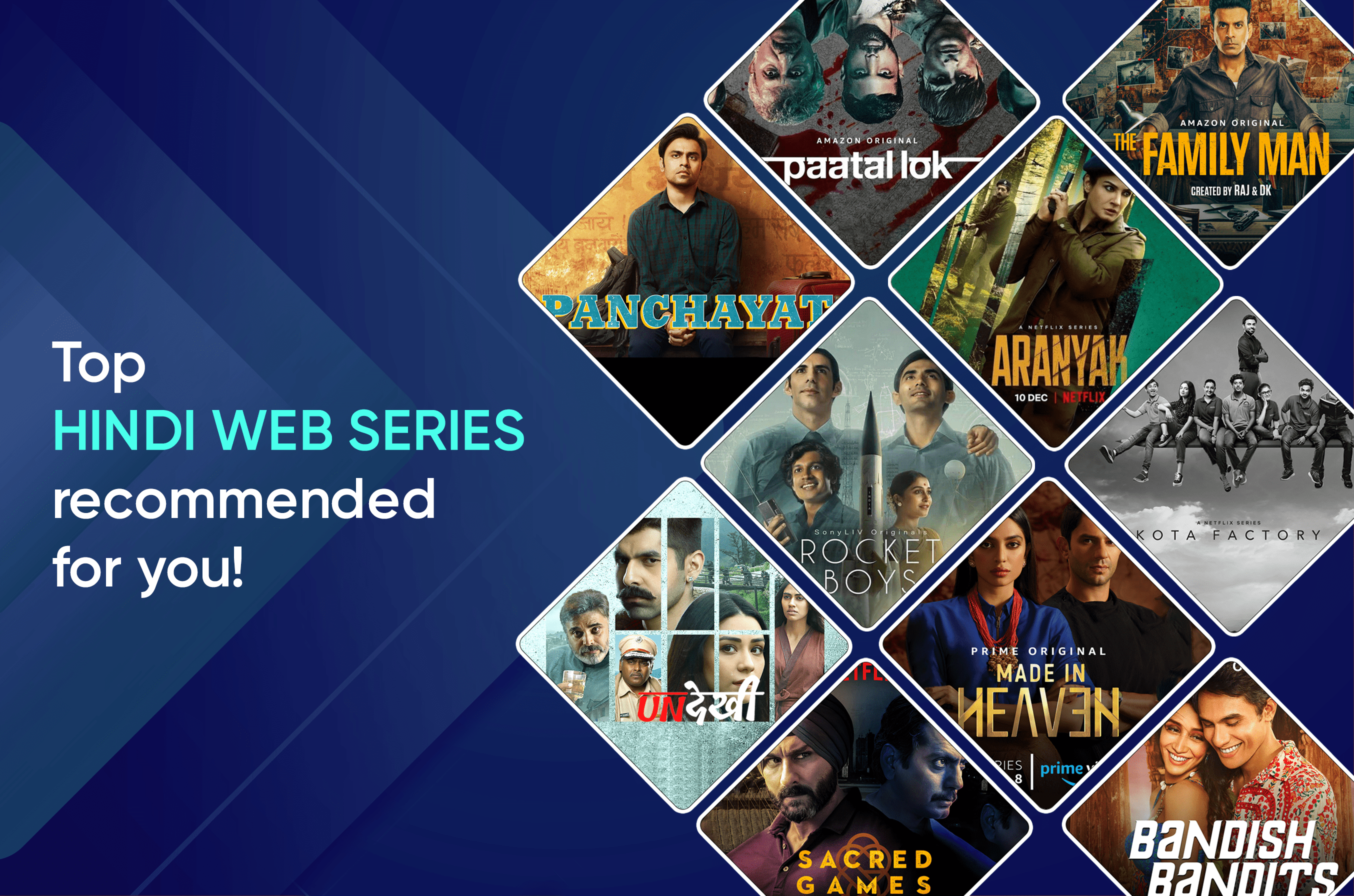 To us Indians, watching a slew of successful Best Web Series in Hindi means a lot. And the rate at which it has grown in recent years is nothing short of astounding. Webseries give us the impression that there is more to come after each episode. And, more recently, Indian creators have created some amazing, relatable and gripping content that is turning heads all over India.

It appears that the creators are finally expressing complete freedom on societal and other issues in order to make people aware of what is really going on. From action to comedy to thriller and crime, Indian Web Series  have it all. Here are some of the Best Web Series in Hindi  that we have curated for you, and we are confident that you will enjoy binge watching all of these on the weekend, so without further ado, let's get started.

One of the most anticipated Best Web Series in Hindi  is Family Man. It has a large fan base not just because of the storyline, but also because of the excellent cast, which includes Manoj Bajpayee, Shrikant Tiwari, Samantha, Priyamani Etc. The series has been so well received by the Indian audience that they are in much anticipation for a third sequel.  The series follows a senior officer who works for the National Investigation Agency with his closest friend, and as obvious as it sounds, they travel around solving crimes and apprehending criminals that pose a greater threat to society. The series revolves around their problems and hurdles, as well as a glimpse of their personal lives being wrecked as a result of their undying devotion to work.

Rocket Boys is a biographical series based on the lives of Homi J Bhabha and Vikram Sarabhai, two pioneers of the Atomic Research Center and Indian nuclear programme. The plot revolves around their innovations. It also demonstrates how they spent three crucial decades developing one of India's most talked-about inventions: building a small rocket and turning it into a successfully launching rocket, which remains one of India's historic achievements.

3. Made In Heaven - Amazon Prime

Our next Best Web Series in Hindi shows that Marriages are not made in heaven but are formed by two people who are willing to put in the effort. Made in Heaven has drawn a lot of attention, especially in this modern era, for providing a fresh perspective on how marriages are formed. In this series, we follow two wedding planners on an adventure to create the Best weddings possible. But they discover many secrets and lies that cause much chaos before a marriage. It demonstrates how standing up for the truth leads to more progress than simply saying, "Yes, and  living with another person forcibly." You must watch this riveting series to get a fresh take on marriages and all things commitment.

Paatal Lok is a Hindi crime thriller series produced by Anushka Sharma. It's also one of the Best Web Series in Hindi. The gripping trailer drew immediate attention to the show after its initial announcement. This  Best Hindi Web Series  has won numerous awards for its performances, as well as for its plot and direction. It is about a cop who is assigned to investigate a case but becomes entangled in the underworld. However, he must find a way out of it and solve and obtain justice.

The Kota Factory is India's first Black and White series and rightly fits as the Best Web Series in Hindi. Kota Factory demonstrates how education is bound by a set of values that may not always make sense. It is depicted in a story about a student who is new to the city and his journey adjusting to it. It demonstrates how ordinary people's problems are avoided and not portrayed outside. The protagonist is an IIT aspirant who comes from a small town with big dreams to fulfill, but has to go through a lot of adjustments, because he's from a small town that stands against his goals.

The crime thriller genre is prevalent in most Indian TV series and is popularly watched by majority of the Indian audience. Andekhi is our next pick for the Best Web Series in Hindi. This is also a crime thriller set in Manali. The plot revolves around a wealthy, greedy, powerful, and self-centered family who are willing to do any wrong and stoop to the lowest level in order to save themselves. But a special group devises a plan to catch them and their wrongdoings. This Best Hindi Web Series is  very gripping and will keep you on the edge of your seat until the very end.

Panchayat is by far one of India's most popular shows. The majority of the audience is in awe about the direction and plot of this Web Series . During the lockdown is when Panchayat was released. This makes it more unique and relatable to the audience. As we all know, the lockdown affected a large number of people, and this is one such series that people can relate to in their minds. The plot revolves around an engineer who due to a lack of better job opportunities outside his village, accepts a position as a secretary at the Panchayat office in his village. Also, because this is a comedy drama, enjoy all of the humor that Panchayat has to offer.

Our next pick is Aarya, which stars the fabulous Sushmita Sen. Aarya Sareen, the protagonist of the story, is content with her role as a caring mother and wife. But she had no idea her husband was involved in the illegal business industry. Keeping her family's safety in mind, Arya goes against her own husband in order to protect her family and children. Aarya is a gripping story about a woman who has to stand against wrongdoings and, most importantly, protect the safety of her own family.

When a movie or series is directed by Anurag Kashyap, you know you are watching one of the Best series ever made. Anurag Kashyap is well-known for creating critically acclaimed films, and Sacred games is another that fits the Best Web Series in Hindi  list. Sacred Games is an Indian crime thriller series based on the novel by Vikram Chandra. The plot revolves around various instances of corruption in politics, which creates a bloodthirsty environment in the city. Suddenly, a police officer receives anonymous information about a dangerous gang that he must catch, expose, and save Mumbai from further threats.

Hostel Daze is our next Best Web Series in Hindi. Anyone who has been or is a part of a hostel will definitely relate to this series. Especially with your friends, from midnight talks, gossip, laughter, and tears are all sealed between four walls of a perfectly constructed memory. Hostel daze revolves around a group of four friends who share the same hostel in their engineering college. The bond between them grows stronger over time. All of the emotions that occurred during your college years are condensed into one show that you should not miss.

Who doesn't enjoy music? And who doesn't fall head over heels for musicians and singers? Music is unquestionably something that connects people. Our next series under the TopBest series in Hindi is Bandish Bandits, which is based on the story of two lovers who are both singers, but the only difference is that he loves classic music and she loves pop culture music. They also come from different homes with different personalities, one being extremely homely and the other being extremely social. This is a lighthearted Hindi show that you will undoubtedly enjoy.

Candy is our next recommendation for Best Web Series in Hindi. No, the name does not do this series justice because it is a fictional series and revolves around the murder of a young student from a small town. DSP Ratna and her co-investigator, who is a mentor at the school, work together to solve the mysterious murder of a young student and uncover the lies that surround the case. However, you must watch this series to understand what the term "candy" truly means.

Asur is our next recommendation under Best Web Series in Hindi. Asur is a crime thriller Web Series  that has received a lot of positive feedback from critics and audiences for its amazing direction and screenplay. The plot revolves around a former CBI forensic officer who became a teacher and is asked to return to his roots of serving the Central Bureau of Investigation, only to discover that he is trapped in a game with a serial killer. Asur's message is about the triumph of good over evil and secures its place among the Top Web Series.

The plot around Aspirants revolves around the journey and friendship of three UPSC aspirants. Three Best friends are Abhilash SK and Guri, all  aspire to ace the UPSC exam. This Top Hindi series depicts the struggles and trauma that come with being an UPSC  aspirant in a very meaningful way. Meanwhile, they ensure that their friendship endures against all odds and, most importantly, that they achieve this goal together. Aspirants Overall, is a good Top Hindi series  that you should definitely check out.

Last but not least on our list of the Best Web Series in Hindi is Delhi Crime. As the title suggests, the plot revolves around the most heinous incident to have ever occurred in India, the Nirbhaya case. It depicts the aftermath of this  crime as well as the criminals who committed it. It covers the majority of the investigation with facts and details that keep you on the edge of your seat. This is a series that you should definitely watch and be aware of the horrifying incidents that have occured.

Best Web Series in Hindi  have grown so well over time and gained a lot of audience interaction and fans as well. They're constantly coming up with new and relatable content that grabs the audience's attention and keeps them in much anticipation for a sequel. We hope you have a good weekend watching these Top Web Series, all of which are in Hindi. We'll return with another interesting topic, until then Happy Fleeking!