Here's our suggestion on the best SonyLiv web series to binge watch. Get all details on reviews, cast and plot to consider watching new content. Check it out Now! 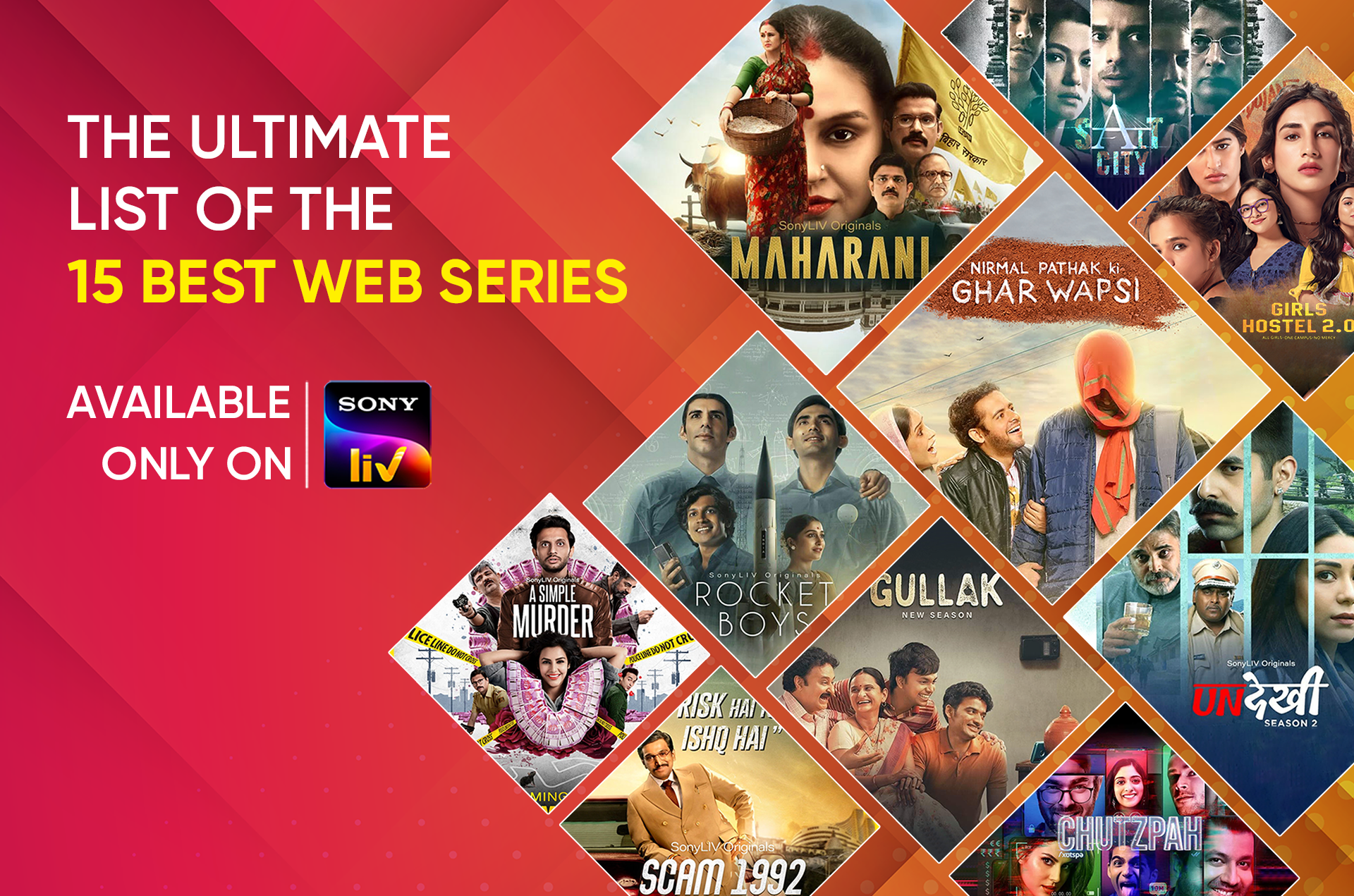 We all enjoy something that combines two of our favorite things. That is where SonyLiv enters the picture. It has an unlimited number of hours of the best curated Indian shows from around the world, as well as great sports content. SonyLiv, as one of the leading OTT platforms, is truly at its best when it comes to providing the right kind of content to its audiences.

SonyLiv also has very reasonable subscription prices along with their wide variety of content, which makes them more user friendly. We have curated some of the best SonyLiv web series that you should definitely watch on SonyLiv and live your weekend to the fullest. Binge watch these, guilt-free, from the comfort of your couch. After that long week, you sure deserve that couch time!

Our first Sony Liv web series suggestion is the most anticipated show which is Nirmal Pathak ki Ghar Vapsi. It is based on a simple young man who is on a journey to discover his roots. On this journey, he is taken back to his village in Bihar, where he discovers that the village where he was born is the same as how he left. The audience seems to be enjoying this show because of its raw emotions that reflect the realities of village life. Watch Nirmal Pathak Ki Ghar Wapsi now streaming on Sonyliv.

In Gullak Season 1 and 2, we were introduced to the Mishra family and shown their sometimes funny, sometimes heartbreaking moments. Season 3 is all about showing the struggles of upper caste and middle-class families in India, particularly in showing the politics that happens inside the home and outside, patriarchal norms and so on. The overall story visualization of the show is truly amazing. Watch Gullak on Sonyliv now.

Rocket Boys is one of the critically acclaimed web series, especially among Indian audiences, because it depicts the extraordinary story of Homi J Bhabha and Vikram Sarabhai, who were the pioneers of launching a rocket in the late 90s. They were well-known pioneers who laid the groundwork for India's first rocket. Jim Sarbh plays an amazing role of a young engineer. Fasten your seat belts and get ready to watch Rocket Boys on SonyLiv now.

The next Sony Liv web series on our list is Undekhi, one of the most popular web series among Indian audiences. It is a crime thriller show set in the city of Manali. Yes, Manali is indeed a beautiful place, but not many beautiful sights happen in this series. The plot revolves around a wealthy powerful family that tries to hide their wrongdoings, but it's about time that justice takes hold of them and gives them the punishment that they deserve.

If you are interested in the stock market, Scam 1992 under Sony Liv web series is a great place to start learning about how the stock market game began, particularly in India. This financial thriller has piqued the interest of the audience, and it revolves around Harshad Mehta, a stroke broker who started his venture to get the Indian stock market to its peaks, but he starts to go higher and higher, facing a lot of pressure and roadblocks that eventually bring him down. It has become one of the most-watched web series on SonyLiv because it perfectly depicts Harshad Mehta’s dynasty and the Indian stock market scam.

Salt City, which was released on June 16, 2022 and falls under the newest addition of Sony Liv web series 2022. It has captured the attention of the audience due to its gripping storyline and cast. It depicts the journey of the Bajpayee family and how they live each day with different complexities of life. It also unwraps a lot from the past, while gripping to the present and facing an unpromising yet hopeful future. Watch Salt City now and discover all the hype that there is to it.

Standing at the 8th most viewed Sony Liv web series, Chutzpah revolves around 5 stories that are intertwined with one another and explore the realities of life, but they also show the lives of these characters, who are sometimes delusional and sometimes quirky. This series contains five stories about five people, each of which is guaranteed to make you relate to it. From one person who is stuck in a complicated relationship to the other person who is completely obsessed with the Internet, watch Chutzpah now and unlock these 5 characters.

The next Sony Liv web series on the list is Maharani, which stars the versatile actress Huma Qureshi and is based on a political drama set in Bihar in the 90s. It's a fictional series, but it contains many real-life incidents, particularly the political drama that takes place in Bihar. Huma Qureshi does an excellent job of arousing the audience's curiosity and anticipation, for them to form an accurate opinion of the plot. You can watch Maharani on SonyLiv.

A Simple Murder ranks tenth among the best Sony Liv web series. A Simple murder is based on an entrepreneur who is facing a failed venture in his job. He has a lot going on in his life in terms of being financially unstable and also clueless, and ends up getting a contract to kill a young girl. However, the young girl in question is the daughter of a powerful politician. Amid all this chaos, Manish's wife must decide whether greed is more important than self-worth.

Our next recommendation, and one of the best Sony Liv web series, is TVF Pitchers, which was put together by The Viral Fever company's like-minded group. It discusses how four men leave their well-paying jobs to run a startup. It depicts the ups and downs of how a startup works and what they must go through to make a company successful as well as attract an audience. Watch Pitchers on SonyLiv now to learn the ins-and-outs of a startup.

Who doesn't remember their first college romance and get a whiff of nostalgia when they think about it? This SonyLiv web series presents a one-of-a-kind story about your nostalgic college romance moments. In this series, three best friends search for love, good memories, and meaning in their college years. If you want to relive your college life's nostalgic moments, then College Romance is the series for you. Tune into SonyLiv now to learn more about what College Romance is all about.

13. Avrodh: The Siege Within

Our next recommendation is guaranteed to instill a sense of patriotism in you. The plot revolves around the assassination of a militant based on the surgical strike and all the other aspects that occurred during that time. It has gripping movements, a lot of raw, intense emotions, and other elements that will undoubtedly show you the other side of war. Watch Avrodh: The Siege Within on SonyLiv now.

Our next pick is JL50 which stars Abhay Deol, and Pankaj Kapoor on the list of actors in this Sony Liv web series. It follows a CBI officer who is assigned the task of investigating a plane crash. It's a top-secret mission, and they gradually realize that the plane crashed somewhere in northern Bengal when it returned from a Kolkata airport. It's a sci-fi thriller that will keep you on the edge of your seat.

Your Honor is the last but certainly not the least on the recommended top series on SonyLiv. The protagonist of the story is Bhishan Khosla and one of his kids. Bhishan is involved in a hit-and-run incident and ends up being identified as the son of a local mafia. The series depicts the conflict between these two opposing sides as well as the lengths to which a father will go to save his son.

SonyLiv is your one-stop app for unlimited Indian online shows and hours of sports! Fleek has the best experience when it comes to managing subscriptions, but they also have some great deals, discounts, and Fleekcoins. When you buy a subscription on Fleek, you get a discount of upto 30% when you use Fleekcoins.

We hope you enjoy this list of SonyLiv web series and have a great time binge watching them with your friends and family. We will return to you with another highly anticipated blog that we are confident you will enjoy reading about; in the meantime, Keep calm and Fleek on!

1. What is best on SonyLiv?

Harshad Mehta Scam 1992 is one of SonyLiv's most popular shows. If you are interested in the stock market, then this is the series for you.

2. How many members can use SonyLIV?

SonyLiv provides their users with the great benefit of 5 screens per Premium account. This means that five different devices can stream SonyLiv together.

3. How much does sonyLiv subscription cost?

They also have a trial period of 30 days that you can opt for before you take up any of these subscriptions.