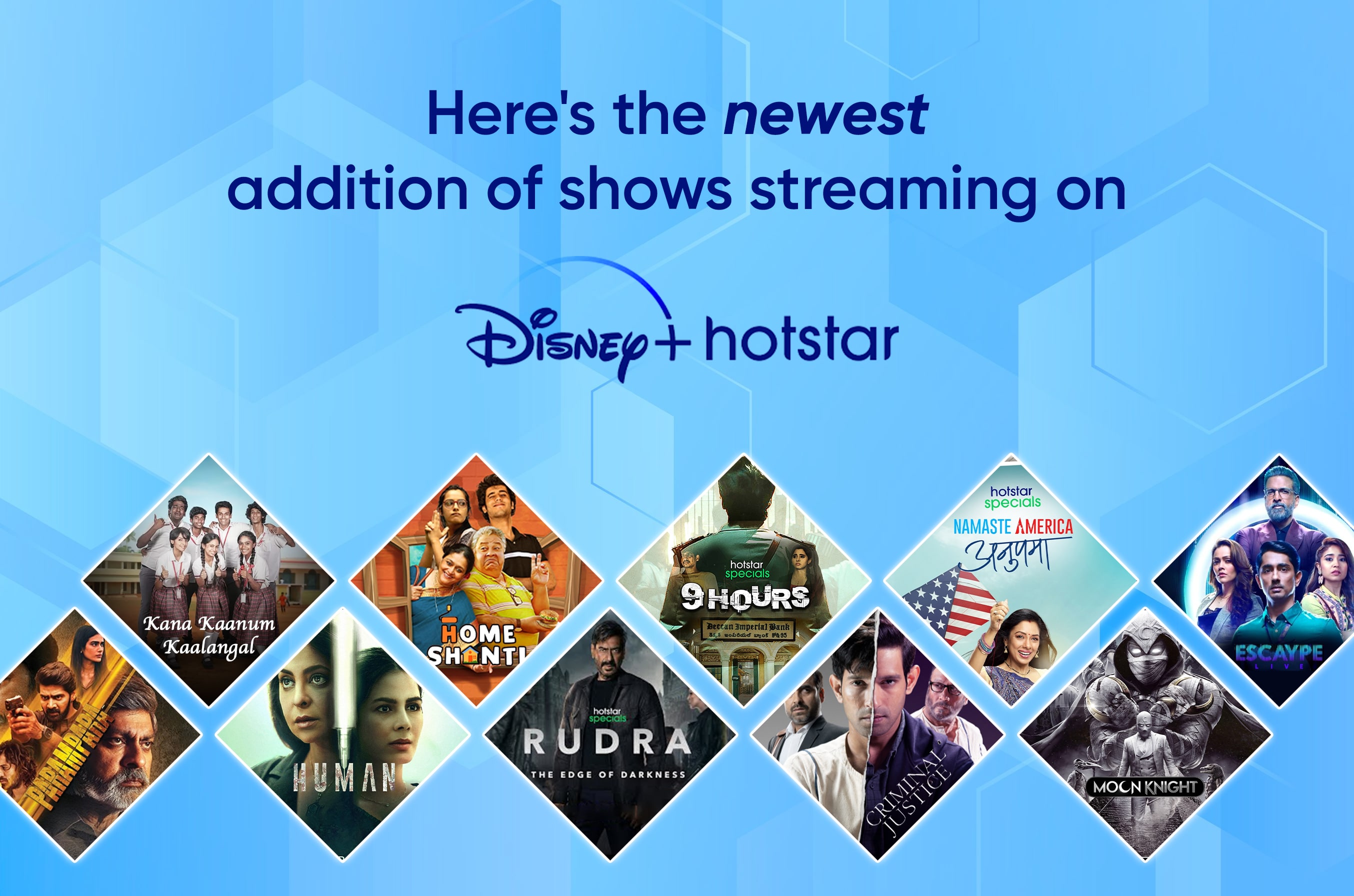 One of the most popular OTT platforms around the globe is Disney+Hotstar. It has millions of users who subscribe to the OTT platform because of its large range of movies, television shows, etc. Hotstar has grown in popularity over the years as a result of the type of content it airs, which is relatable to a wide range of audiences. Everyone, whether a toddler, a teenager, or an adult, has something to watch on Disney+Hotstar, and that is the most exciting part about it.

We've compiled a list of trending New Series on Hotstar so you don't miss out on any of the content and have plenty of series to binge on. We strongly suggest you keep this list handy, especially now that the weekend has arrived so you can have a smooth journey on the Binge wagon!

The first series in our list of New Series on Hotstar is 9 hours. As the title suggests, the series follows a group of inmates who have robbed three banks and must complete the task within nine hours before their next roll call. This series will keep you on the edge of your seat because it revolves primarily around time, and we all know how unpredictable time can be. Even though the characters in the series are short on time, this series will keep you captivated enough to make you lose track of your time. See the irony?

Criminal Justice is a new series on Hotstar, based on all things crime. This new web series on Hotstar consists of ten episodes and stars Jackie Shroff, Pankaj Tripathi, Vikrant Massey, and others. The lead character, Aditya Sharma's life is turned upside down as he is wrongly accused of murder. Aditya hails from a tiny middle-class family and works as a driver. He tries to break out of this blame that has fallen on him, but he finds it difficult to do so due to the upper-class tyrants that trample on him.

Our next New Series on Hotstar is the well-known “Anupama”, which has captured the hearts of many viewers as one of the most popular series in India. Anupama is based on a woman who comes from a middle-class family and is restricted by social standards as well as rules from her husband's family. They don't treat her well and don't value her for everything. Meanwhile, Anupama - Namaste America is a story set ten years before Anupama got married and had to give up her ambition of visiting the United States.

Moon Knight is a new superhero on the block, and it's one of the newest programs on Hotstar. Steven Grant discovers that an Egyptian Moon God has bestowed upon him superhuman abilities, but he quickly learns that these abilities may either be a blessing or a curse. Later, he is reminded of his prior life, and the Egyptian God picks Steven Grant's body to be his avatar to save the planet from another Egyptian God's realms. Watch this New Web Series on Hotstar now!

As the title suggests, our next New Series on Hotstar, Escape Live depicts the challenges of ordinary individuals who are forced to compete against one another for recognition, glory, and fame. It also shows the bad effects of social media and its consequences. Escaype Live has gotten a lot of positive feedback from critics and audiences owing to its captivating storyline and exciting content. To elaborate, it focuses on those who must step outside of their comfort zone to obtain a comfortable life while also being competitive.

At any point in time, anyone would return to reliving their school days. School days are those days that cannot be relived or replicated. Those who are still friends with your schoolmates, LUCKY YOU! The story depicts two divided class groups, in a fierce rivalry. And, as we all know, school rivalry is something we all remember, and this is exactly what this series depicts. Watch this series right now and reminisce about your school days. Watch this New Series on Hotstar now!

Parampara is our next New Series on Hotstar on the list. Parampara is the best choice of online series to watch for everyone who enjoys true family drama like solving everyday problems and twists. It is based on a sequence of family dramas, in which a vicious battle rages between two brothers who must struggle for both their morality and their property. But, in the end, we all know that standing united as a family always wins, but will this be the case here? To find out, watch Parampara right now.

Human is our next New Series on Hotstar, which was just released this year. Human revolves around an engrossing tale that has sparked numerous debates in the real world as well. The story centers around exposing a pharmaceutical company that has been involved in numerous scams, and not serving the public fairly. It also demonstrates how few pharmaceutical corporations use innocent people to conduct drug testing. Humans is currently streaming on Disney's Hotstar.

Home Shanti is your daily dose of everyday family drama. This is one of the New Series on Hotstar that will show you all the sides of everyday family drama that we are sure you will enjoy. The story follows a family of four, who live a fairly regular existence and experience some of the same challenges that we all face in our homes. But the major character has to be their Father, who goes to great lengths to make their lives easier by leaving his own priorities behind.

Last but not least, Ajay Devgn, one of Bollywood's biggest actors, stars in our last recommendation of New Series on Hotstar which is Rudra -The Edge of Darkness. The show has gotten a lot of buzz because of its intriguing plot and captivating cast. And also it's a remake of the popular BBC series Luther, which we all know has secured a huge hit! Rudra, a cop who looks beyond his job, wants to catch everyone who does heinous things. To stop the wrongdoings, he must think one step ahead of his enemies. Now you can see Rudra in action on Hotstar!

Black Monday is a comedic web series. Andrew Rannells, Paul Scheer, Regina Hall, and Casey Wilson star in the sitcom, which has gotten a lot of buzz. The plot centers around outsiders who take on Wall Street's old boys' club in the 1980s. It sends you back in time and depicts a group of people attempting to wreck the world's largest financial system, the stock market. Season 3 just came out recently, and you don't want to miss out on any of the action.

Running Wild with Bear Grylls is a survival skills reality TV show that is full of adventures. It depicts Edward Grylls switching to the wild side and demonstrating the other side of life, which is full of adventure and new experiences. He also encounters wild animals along the trip. Running Wild with Bear Grylls is a must-see for everyone who wants a taste of the wild side from the comfort of the couch.

This is the perfect series for anyone who likes crime fiction. The Golden State Killer, a serial rapist turned murderer who shook California for almost a decade, is the subject of the series, which is based on a true event. The series depicts the full investigation of this case, and be warned: it is not for the faint of heart, as it contains certain facts and delicate information that may appear strange at first, but are too unreal to be true!

The Chi is a new series with a fresh storyline. It is based on the coming-of-age story of a young African youngster who wishes to learn everything there is to know about life and death. This series depicts the transition from childhood to adulthood and how life changes after that. You might find a lot of comparable scenes in the series that remind you of your adolescent years or make you wonder how you could have sorted things out better when you were young.

Betty is a drama set in the 21st century. It has a close-knit teen group of girls who are obsessed with skateboards. The story depicts not only their passion for skateboarding but also their coming of age experiences, which you may be able to relate to or recall at some point in your life. The eclectic mix of characters who each have a different view and perspective on life is what stands out the most in this series. If you're looking for some fresh entertainment to binge on, check out this series.

We hope you've enjoyed reading about the finest new series on Hotstar and we also hope you've already made a list of your favorite shows among these to watch this weekend. Guaranteed that you will not be disappointed by this collection of shows, as you will experience laughter, fun, anticipation and definitely a whole lot of binge. We'll be back with more recommendations to keep you in a happy mood while also keeping you informed about the best entertainment available.

1. Which is the best web series on Hotstar?

Criminal Justice is one of the best series to watch that is currently trending on Hotstar.

2. Which OTT platform is best?