OTT Platforms - Everything You Need to Know 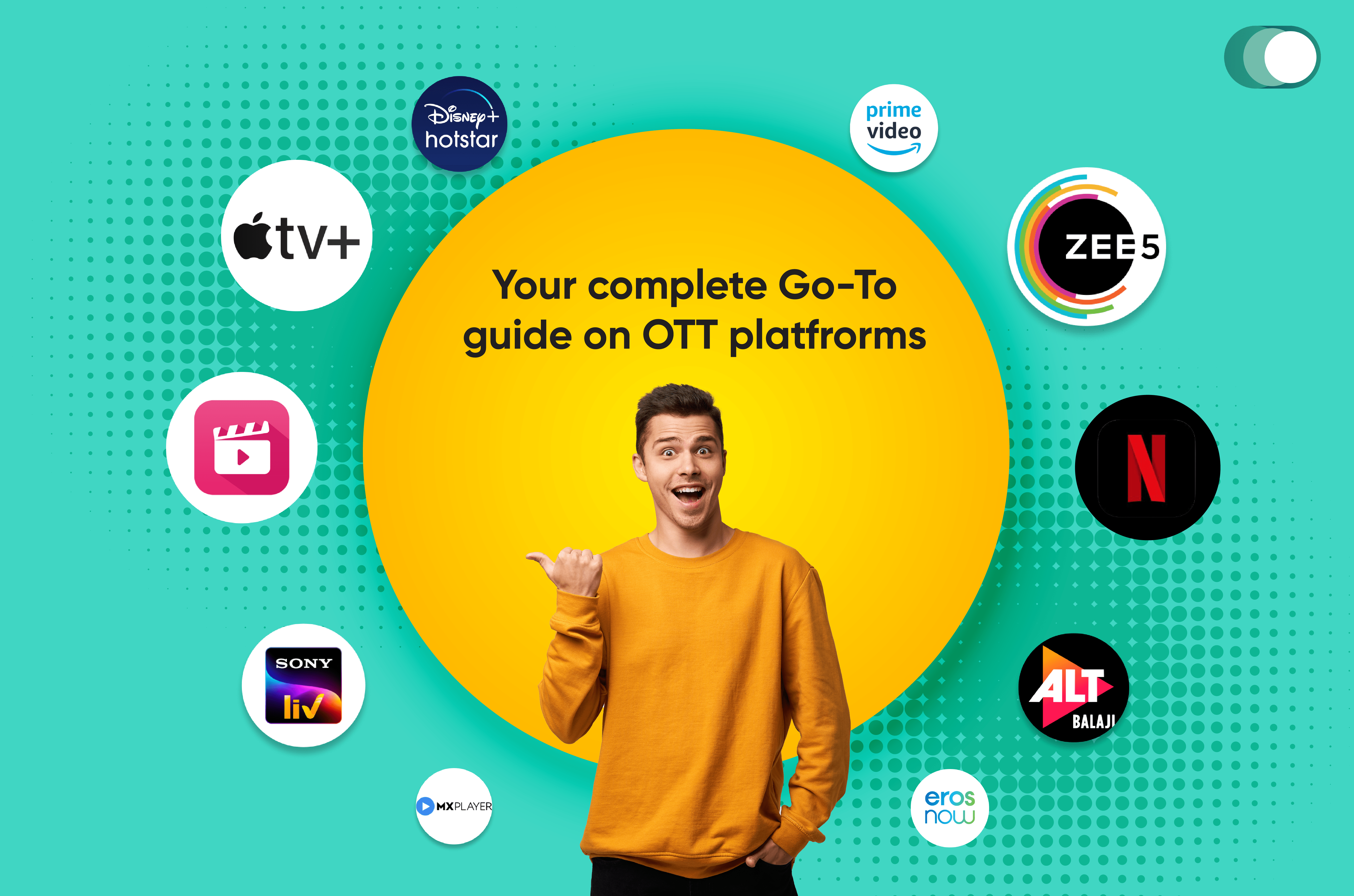 What is OTT? What are OTT Platforms?

OTT stands for over the top content, which is delivered to you over the Internet and can be accessed across any time period that you prefer. The mode is usually through a broadcast cable, satellite, or any other TV providers. You basically pay for an Internet provider and you can watch all these shows which are streaming on the platforms. These OTT platforms provide premium content at the comfort of your couch.

Another key feature of OTT platforms is the cancellation feature, which has been a huge boon. If you do not want to continue with the subscription, you can always cancel rather than paying for something you will not use.

Without a doubt, OTT has transformed the digital landscape for content creators, other organizations, and, most notably, brands. They also get to collaborate with a variety of other brands in bringing content to the platform, which is a win-win situation for both the company and the middleman.

Let us not forget how much COVID influenced the rise of OTT platforms because most people began using these OTT platforms to watch their favourite shows from the comfort of their couch rather than going to a movie theatre.

We can only wait on where these OTT platforms will go in the future, but for the time being, there is no denying that they have been a huge hit all over the world.

OTT subscriptions can be accessed via computer, phone, tablet, and smart TV, allowing you to watch the latest shows from the comfort of your couch. They can be linked by a simple internet connection, allowing you to enter a new world of entertainment. It also stops you from splurging on expensive tickets. In short OTT platforms are easy, transactional and in demand.

The added benefit with top OTT platforms is that you will be directly reaching your target audience, which provides consumer freedom and control. Simply select your preferred form of entertainment on a monthly or yearly basis, and you're ready to go! They also offer useful features such as timely reminders to ensure that you never miss out on watching your favourite OTT shows and payments.

How Does an OTT Platform Work

OTT simply means sending content over a high-speed Internet connection rather than sharing content through traditional means such as cable television operators. OTT content can usually be viewed on any compatible device, but one of the most popular ways is to watch it on a smartphone, which has a much larger market. People have benefited greatly from OTT service providers, which are also very cost-effective.

Disney+ Hotstar has over 100,000 hours of TV and movie content in 9 languages. They have a highly evolved video streaming platform that provides a high-quality experience across devices and platforms, making Disney+ Hotstar the most widely used video destination for Over The Top (OTT) and is definitely consumer friendly. It has an easy User Interface, a Hot Content Catalog, lightning fast autocomplete suggestions that help users navigate video in up to 8 languages, and spans 15 TV channels. Disney+ Hotstar is without a doubt the country's longest running and highest rated TV content.
Buy Disney Hotstar plan on Fleek at 37%

We're guessing you've heard of Amazon Prime one of the leading e-commerce companies in the world, and now a top OTT platform too. They specialize not only in deliveries, but also in providing unlimited shows and music services through their prime app. Wait for the drumroll.... They also have a watch party where you and your friends can watch a movie and chat. PS: Using social distancing, this is the best and safest way to watch movies. Amazon has over 10 million users in India alone, so you can imagine the global numbers.
Buy Amazon Prime plan on Fleek at 29%

Netflix is an American based OTT platform company  that was founded in 2012 and has never stopped making headlines. People would still choose Netflix plans over watching movies on a free website because of the variety of movies and shows available, as well as the picture and sound quality! The majority of the movies and shows that people eagerly await to watch are mostly available on Netflix! According to Netflix's technology team lead, Mr. Shergill, "From a tech standpoint, we feel that streaming is actually the confluence of great content and great technology."

Sonyliv is a service provided by Sony Pictures Networks India Pvt. Ltd. in India. We all grew up watching serials and shows on Sony TV, and now they are offering a wide range of shows on their OTT platforms, which includes some good movies and TV shows, as well as some super plans that are cost effective. It offers over 40,000 hours of television programming in Hindi, English, Telugu, and Tamil. If you sign up as a premium subscriber, you will have access to all of SonyLIV's original content.
Buy SonyLiv plan on Fleek at 34%

Apple TV is a set-top box designed for Apple users to connect to OTT and other digital services. The setup is similar to that of any other set-top box, with the exception that connectivity can only be accomplished via the Apple app, which benefits only Apple users. However, the features are amazing because they include some handy controls and the picture quality is really amazing. They also have some selected movies added to their list.

AltBalaji is owned by Balaji Telefilms Ltd and was founded in 2017 by Ekta Kapoor. It has since risen to prominence in the OTT industry. What makes this app unique is that it has shows tailored specifically for the Indian audience and can be used on multiple interfaces. It has also been observed that they provide the best picture quality, which will undoubtedly keep you glued to the screen for hours.
Buy AltBalaji plan on Fleek at 34%

ZEE5 is another top OTT platform that has a variety of shows curated for you, from comedy to romance to family, you name it, they have it covered. The main feature is that they have 12 navigational and featured languages, as well as great speed and sound quality. They also have something called Smart Content Search & Recommendation. With so many features, you can't help but ditch your theater plans and enjoy the magic at home!
Buy ZEE5 plan on Fleek at 44%

Eros was launched in India at the end of 2012 and has since become one of the most popular OTT platforms. Eros Now is a complete Bollywood package, so if you have a craving  for all things Bollywood, you know what to get. It includes 1000s of Indian hits, and the best part is that you can stream and download in HD without any ads. It also supports a wide range of languages, including Hindi, Tamil, Punjabi, Malayalam, Telugu, Kannada, Marathi, Gujarati, and Bengali, and can be connected to almost any device, including Android TV, Roku, Google Chromecast, iOS, and Android mobile devices.

Jio Cinema is an OTT platform that hails from RPPMSL. It currently has over 1 lakh hours of content, which includes movies, TV shows, music, and other media. They are available in several languages, including Hindi, English, Tamil, Kannada, Marathi, Telugu, Bengali, Gujarati, and Punjabi. They have a massive genre that includes not only new shows but also old shows that you grew up watching! They offer customized Viewing options, including adjustable Playback Speed and Brightness controls. You can also use Multiple audio support on JioCinema web and resume watching from where you left off without having to start from scratch!

MX Player has over 20 original shows and up to 50,000 hours of Premium Content. Karan Bedi, CEO of MX Player, created this app. MX player comes under the  OTT platforms that provide high-quality Hindi and regional languages that can be streamed on iOS, Android, and other devices. It also includes a powerful video player that supports all audio formats and is available in a wide range of languages including Bengali, Bhojpuri, Malayalam, Tamil, Kannada, and Punjabi. You can watch your favorite shows in HD quality and listen to popular music videos, and they have special features such as Amazing Playback Features, Audio Enhancement and Support for Subtitles.

The Future of OTT Platforms

According to a recent PwC report, India is the world's fastest growing OTT platforms market and is expected to become the sixth largest by 2024. Also, as a result of the Pandemic, growth in terms of viewers and subscriptions has been accelerated, and this trend will continue to amplify and grow not only in metros cities but also in tier II and other cities. Another reason could be that, as a result of the closure of public gatherings, the OTT empire will grow even more, posing stiff competition to service providers. However, the future of  OTT platforms in one app in India right.

Overall, we are pretty convinced of how OTT platforms have recently risen to prominence, and we can't wait to see what else they have in store for us. People's desire to watch entertainment will never go away; in fact, it will always evolve. The future of OTT platforms are bright, so why not start managing your OTT platforms with Fleek at the click of a button that has All OTT platforms in one app in India.

1. What are the Common Features of OTT Platforms?

The Common Features of OTT Platform are:

2. How many OTT platforms are there?

There are approximately 40 OTT platforms in India.

3. Which OTT is best in India?

Netflix still stands as one of the top OTT platforms in India with up to 5.5 Million users.

4. Which OTT platform is free in India?

Voot powered by Viacom is one of the Free OTT platforms in India.

5. How do OTT platforms make money?

OTT platforms generate revenue through ad revenue models, business models, and three main pillars: AVOD, SVOD, and TVOD. Users pay a set fee to gain access to shows that can be viewed for up to a year.