Top 20 Hotstar Web Series that will Blow you Mind 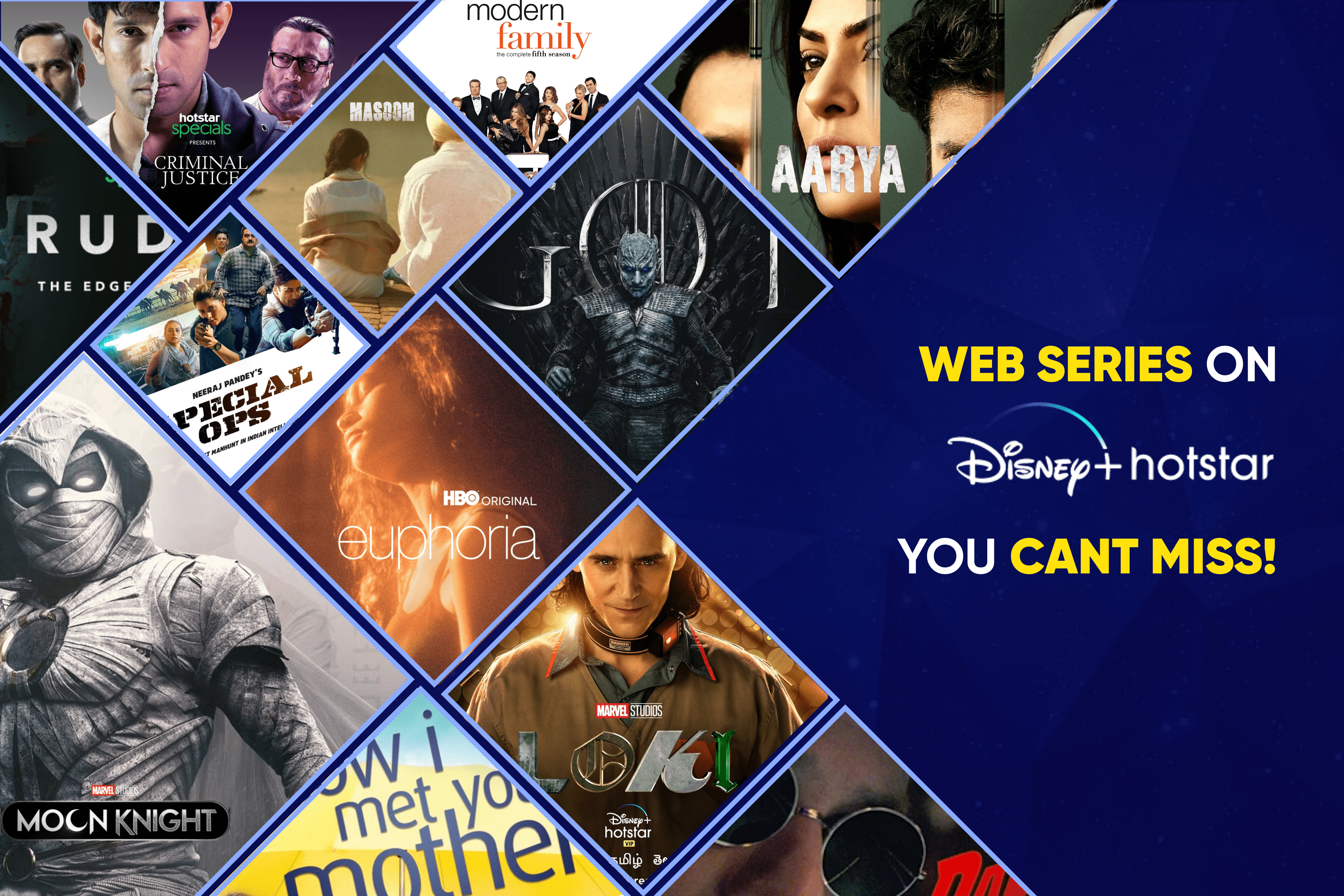 When you start to feel as though you have run out of web series to watch, Fleek shows up with some of the best ones that you haven't seen before and then vanishes the FOMO you have! We are back with another blog on the latest web series that are the buzz of the town and streaming on Disney+ Hotstar. From Euphoria’s Zendaya, who gives an Oscar-worthy performance to Boman Irani in Masoom, we have it all!

If you’re a GOT fan, irrespective of how Season 8 played out, it will make it to the list of the best shows you have ever watched! Period.

This Medieval drama show is all about kings, knights, swords, dragons, and ghosts and so much more! The entire cast has outperformed themselves with their phenomenal acting and amazing cinematography. Game of Thrones is definitely a  highly addictive television show!  While the deaths of Jon Snow's knights by Arya Stark in season eight did have an adverse effect, if you ask us he is one of the most sympathetic characters in Game of Thrones because of his total belief in Daenerys and because of this his words and character will last forever.

2. How I Met Your Mother

How I Met Your Mother is one of the best sitcoms to have ever been made. If you think this is like the regular sitcoms you have watched, you’re terribly mistaken. Normally, sitcoms have only one motive: to make you laugh. How I Met Your Mother isn’t your mainstream sitcom. There’s friendship, there’s love, life, pain, sorrow, betrayal, heartbreak and much more. This series clearly shows how life is not always a happy ride, it's filled with ups and downs. The story and the characters are extremely well written and is a must watch.

Loki is by far the best work of Marvel Phase 4. The series starts off right where Loki flees from the Avengers tower in The Avengers  and shows us the series of events he goes through. Following the theft of the Tesseract seen in Avengers: Endgame (2019), a replica Loki is transported to the Time Variance Authority (TVA), an institution that exists outside of time and space and appears to be in charge of keeping an eye on the timeline. The plot is very well written and the only disappointing thing about this series would be the fact that Season 2 is not out yet. But don’t worry, it is coming soon!

Moon Knight is one of the finest characters and well written plots of the MCU. There were always questions being raised if an Egyptian hero was the right idea, but the storyline was so well written that it turned out to be one of the best heroes of Marvel Phase 4. Oscar Isaac has proven yet again that he’s one of the greatest of all time and the only actor who has been a part of 3 billion-dollar-superhero franchises. His acting skills are a treat to your eyes and is a must-watch web series.

Prison Break is one of the best shows on Disney+ Hotstar. The plot is simple: An engineer installs himself into the prison he designed to help free his brother who was falsely accused of a crime. The series might have a slow and a rather time consuming start, but that’s just the character build up. The story gets really interesting as the show progresses and shows real life problems inmates face inside prisons. The show is very well written and is a must watch.

A show that will have you in tears by the end!

If you’re the type of person who hates mainstream sitcoms because of the background laughing sound and is more of a Brooklyn Nine Nine person, then this one’s for you.  Modern Family is exactly what it stands for: the life of a family in this modern world. The cast of this show is pretty big and you’d be surprised by the accuracy of the show every single time. The show is written exceptionally and is a great watch.

What if, if directed in real time instead of being just an animated series would’ve unarguably been the greatest show of all time. The show had such great concepts and ideas that it was tough to accept why the creators decided to make it an all-animated show. It dived deep into the multiversal saga of Marvel and brought in much anticipated what if’s to rest. This is one of those shows which will keep you hooked until the last minute and will make you impatient for the next season.

Daredevil is unarguably the best series Marvel has ever produced right next to Loki and What if. The show is so well scripted that despite it being over, there’s a scope for rewriting it in a whole new way as shown in Spiderman: No Way Home, where Daredevil, played by Charlie Cox was brought back. The plot and the action sequences are absolutely breathtaking and will keep you on the edge the whole time.

‍9. Falcon and the Winter Soldier

Get your popcorn and fun mood on for this one, because the title might make you seem that this is gonna be an action series but this one’s more of a roast battle between Sebastian Stan and Anthony Mackie.  The plot is a rather flexible one and it shows how much politics would actually affect the heroes from doing their work. S.H.I.E.L.D at the end of Avengers: Endgame was handed over to the Falcon, but unfortunately America had other plans as the new captain was a soldier boy. The show has a lot of easter eggs in it and is a treat for the Marvel fans.

Euphoria is your classic American high school drama. The series revolves around a character Rue played by Zendaya  who suffers from anxiety and depression and turns towards drugs for comfort. The plot is all about high school romance, drugs, crime, love, hatred, and consequences. The show is very well written and the music is highly exceptional and breathtaking. The actors have played their part so well that they are already on their way to be called the best actors of the next generation. It's a classic series with a bit of sass and is a must watch.

Aarya is your classic Indian action crime thriller web series. The whole series is led by Sushmita Sen who absolutely steals the show with her extraordinary performance. She definitely sets the bar high for all upcoming crime thrillers. The show has a storyline which is similar to that of Ozark, but the series is nothing like it and is thrilling in its own way. While Bollywood movies seem to get worse day by day, series like Aarya bring redemption to the Bollywood film industry.

Special Ops is one of the best Indian shows of all time. The main man, Himmat Singh leads a task force with the motive of finding the mastermind behind several terrorist attacks. The series is so well written that there’s no doubt that this one is absolutely binge-worthy. The cast of this series is chosen perfectly and the series itself is a great example of exceptional direction and camerawork. The best part of this series is how spot on their representation of past tense was. The actors who played the past versions of their present ones were extremely well cast and spot on. It is one of the most gripping Indian web series there is and is a must watch.

Hostages is a remake of an Israeli webseries. The plot is simple: a doctor’s family gets held as hostages and to save them, she has to participate in the assasination of the CM.

Out of Love is often confused to be a thriller but there’s a fine line between thrillers and romantic drama. Out of love is a mix of love, betrayal, hatred and redemption. The story and the character development of this series was highly exceptional and well written. The story is split and shown in different layers which is something not all Indian web series usually go for, as it's risky . The cast, screenplay and direction are spot on and the show is a must watch.

Criminal Justice is one of the best crime thrillers out there in the Indian Web Series market. The story is absolutely well written and gripping till the last second. Pankaj Tripathi has definitely succeeded in stealing the show. The plot is that a middle-class cab driver has his life turned upside down after being falsely accused of murder. The story and direction of this series is exceptional and is a must watch.

Rudra has a different storyline, unlike the regular ones you might have ever seen before. The series is filled with twists and turns and always keeps you guessing. The series was also successful in showing a good relationship between Rudra’s personal life and his workspace. The cast and the screenplay are extremely well written and is a great watch.

Escaype Live is a show which shows us the blunt reality of reality shows. It gives an overview of what happens when you let children play unsupervised mobile games. It also shows the harsh reality of how twisted people can get for the sake of fame and materialism. The show also talks about consent and how consent can be manipulated by people in power. The plot is unlike anything you might have ever seen before and is a must-watch.

9 hours is a classic hostage drama that keeps you hooked to the screen. The storyline is very gripping and the cast are very well written. The BGM, camera work and the visual effects are outstanding and absolutely top notch. The show is based on the book Tommidi Gantalu, written by Malladi Venkata Krishna Murthy and Krish has given us its best adaptation.

Masoom is a show that keeps you hooked from the very first second and never lets you let go. The music is exceptional and the story is unlike any web series you might have seen. There’s drama, there’s mystery, filled with twists and turns. The plot is very well written and is a great watch.

The Great Indian Murder is a crime drama as the name stands for. The plot is that when an ambitious industrialist gets killed in a party, the prime suspects are the guests. That is both, the invited and the uninvited ones. The storyline is so amazingly written that it surprises you every time a new character is brought to the screen. Each episode has a great connection with each other and makes sure to keep you glued to the screen.

1. What is included in a Disney+ Hotstar subscription?

2. How can I get a discount on the Disney+ Hotstar super plan?

Fleek provides you with more than just the privilege to manage subscriptions. You can get great discounts on every subscription purchase or renewal. With Fleek’s Hotstar subscription offer, you can get up to 10% discount from Fleek, and you can also get up to 40% extra using Fleek Coin. So the next time you want to buy or renew a subscription, simply use your Fleek Coin during checkout to get a wholesome discount.