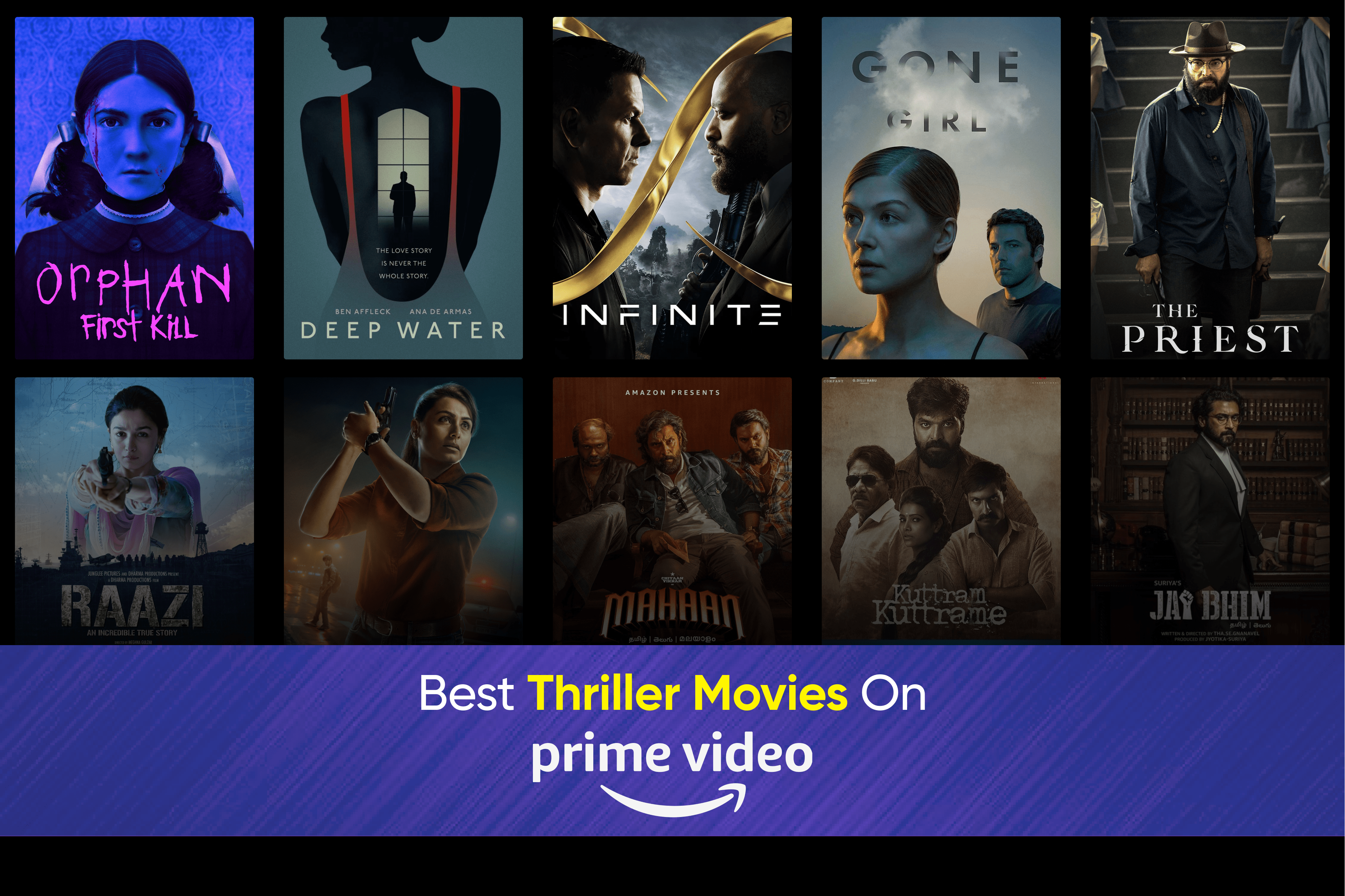 Everyone enjoys a thriller movie night with some gripping storylines that will keep you on the edge of your seat or twists and turns that will keep you thinking even after the movie ends. We have curated some of the best thriller movies that are streaming on one platform, which is Amazon Prime, so all you have to do is get in your bed, tuck in, and tune in for a great weekend to binge watch them.

Shaken, Not Stirred! That’s our first thought about James Bond.

Who doesn't love James Bond? Daniel Craig plays fictional British MI6 agent James Bond in his fifth and final act in No Time to Die. Something appears to be fishy in Jamaica, and we need Bond’s intervention to bring peace to the chaos. If you are a die-hard James Bond fan, you know that there is nothing more thrilling than this film.

This film is about a husband who lets his wife have affairs in order to avoid divorce. Yes, it may sound strange, but you will only understand the concept of this film if you watch Deep water. Not to mention the amazing cast in this film, which stars Ben Affleck, Ana De Armas,  Jacob Elrodi, and others who make this movie a complete package. One thing about this movie that was lacking was since it was an adaptation of Patricia Highsmith's 1957 novel, there was no such thing that brought out her imaginative elements!

But now it’s time to see him in Nobody! The audience, in particular, has responded positively to this film, owing to the fast-paced storyline and other elements that make Nobody one of the best action thriller movies. The plot revolves around Hutch, whose life is shaken after thieves break into his house in order to punish them. He chooses to follow a deviated path that we won’t reveal to you because you need to watch the movie right now!

Before we get into how good this movie is, can we talk about  Robert Pattinson and Zoe Kravitz's chemistry? This is the collaboration we did not want but needed!

Another film in the Batman franchise, and this time the story revolves around Batman who must intervene when the mayor of Gotham City is killed. As investigating sparks it leads to a chain of truths and unexposed information which are linked to his own past. The audience has definitely enjoyed Robert Pattinson in this role with his impeccable acting skills and has definitely done justice to the other Batman movies.

There are not a lot of movies that bring chills to your spine and also make you bite your nails off.

Gone Girl is one such film! Rosamund Pike effortlessly carries off this very difficult role in the film and plays an amazing character of the protagonist who is having problems with her marriage life and rekindling her husband's love for her. However, when she discovers that he is cheating on her, things take a very wrong turn for both of them. Ben Affleck plays the husband in the film.  We’re all in for team Amy since she was cheated on but gosh Amy could have gone a tad bit easy on the revenge maybe?

Making it to number six on our list, Hit is about a police officer who is assisting a homicide team and must overcome the struggles of his tragic past in order to investigate a case involving a missing woman. The cast, which includes Vishwak Sen, Ruhani Sharma, Chaitanya, Sagiraju Brahmaji, and others, are new and vibrant actors, who contribute to making this film exciting with a breath of fresh air. It is definitely a movie with a lot of twists and turns and a lot of gripping moments that you should definitely watch if you are a thriller fan.

I'm sure Nani fans have already seen this movie, but is it safe to say that this “movie started well but ended not so well?”

It was one of the most anticipated films in the Telugu industry, with an incredible cast that included Nani, Aditi Rao Hydari, and Nivetha Thomas. It's about a cop who is interrupted by a mysterious killer who challenges him to end his killing spree. Nani plays an impeccable role of a cop, but one thing this movie could have had is a better story post interval as it definitely messed up the ending!

Mammootty, also known as Mamukaa, has a worldwide following. And with any Mammootty film, you know you're in for an absolute thriller, not to mention his impeccable acting skills. The Priest is a best thriller movies on amazon prime, based on Father Carmen, who teams up with the police to investigate a mysterious case, but one fact leads to another being revealed in time. The movie definitely bought a new side of cinematography but the essence of horror and thriller? A bit bland, we would say. It's a must watch movie on amazon prime.

Nayanthara and her on-screen magic make this one of the most celebrated thriller movies of all time.

It's based on a CBI officer who has to track down a serial killer whom the police have already declared dead long ago, but when the investigation becomes personal, it takes a toll on a family. Nayanthara plays Anjali Vikramaditya, a CBI officer, and she is one of those actresses who can woo you with her college girl charm while also whooping criminals with her rugged appearance.

We know you want to yell "Pushpa Raj, Thaggede Le" at the mention of the film's title. We could get into a debate if this movie was overhyped or not but we could give it a decent rating.

Apart from having blockbuster hits with its music, the movie has made a lot of name for itself and a separate fan base for Allu Arjun especially. There are also other  actors in this movie like Rashmika Mandanna, Fahad Fazil, Samantha Ruth etc. The plot revolves around a Pushpa who makes enemies in the red Sandalwood smuggling industry. However, violence does occur when illegal business is conducted. Pushpa, on the other hand, does not back down. If you haven't already seen Pushpa but you are a fan of the songs, now is the time to become a fan of this movie.

From playing an innocent diva in Student of the Year to an undercover RAW agent in Raazi, Alia Bhatt continues to outperform herself in every other role.

The story of this best thriller movies on amazon prime revolves around Sehmat Khan, played by Alia Bhatt, who  is an undercover RAW agent married to a Pakistani family by her father in order to gather valuable information about the enemy side. This movie speaks volumes on love, patriotism and betrayal, that’s 3 reasons to watch this movie already. It also stars Vicky Kaushal, Soni Razdan, and other actors, making this film a complete package.

Rani Mukherjee's performance as Shivani Shivaji Roy in the film is one of the many reasons why you should watch this movie right now.

Rani Mukherjee plays a strong officer in the Mumbai Police Force, but she has to find out about the child trafficking sector in Delhi and put an end to it right away. The film won awards for best villain, best design, and many more for its impactful storyline and gripping performance by Rani Mukerji.

Chiyaan Vikram still manages to woo us with any character,  whether he's playing an innocent Ambi or Gandhi in Mahan.

Also, this movie is also special to Vikram because he's working alongside his son Dhruv Vikram, who also manages to do an amazing job despite working with his extra-talented father. The film is based on Gandhi Mahan, a school teacher who works on self-discovery after being abandoned by his family. But, over time, he becomes blinded by money and overcomes numerous challenges.  Also catch "Evanda enaku custody", which is a very groovy song from the movie that you must tap your toes to. You could say Gandhi Mahan is the Indian Walter White!

Kuttram Kutrame is another best thriller movies on amazon prime and also a crime movie starring Jai,  Harish Uttam, Divya Duraiswamy, Bharathiraja, and many more who have done an amazing job in bringing this Masterpiece together. This movie is based on the murder of a villager’s sister and the police have to investigate and track the person who is responsible for the heinous crime. Could Kuttram Kuttrame lead to the making of Veerapandiyapuram 2?

We're saving the best for last.

We're pretty sure most of you have already seen this movie, whether you know Tamil or not. Amazon Prime has been nice enough to host this movie in multiple languages because trust us, you do not want to miss out on this epic thriller drama. Starring Surya as a brave activist lawyer fighting for the justice of a poor tribal man falsely accused of robbery. Not to mention Lijimol Jose and Manikandan K who plays an amazing role as a tribal couple and bring out the true emotions that will have you in tears. With several national and international awards in the bag, Jai Bhim is undoubtedly one of the best thriller movies on Amazon Prime in 2021!

We did warn you about these best thriller movies on amazon prime being super thrilling!! Now it's up to you to pick out your best movie that you want to start off binge with. We will come back with another week of the best movies and TV shows that are the talk of the town. Meanwhile, we hope you complete this entire list and give yourself the best weekend and break from all the stress!