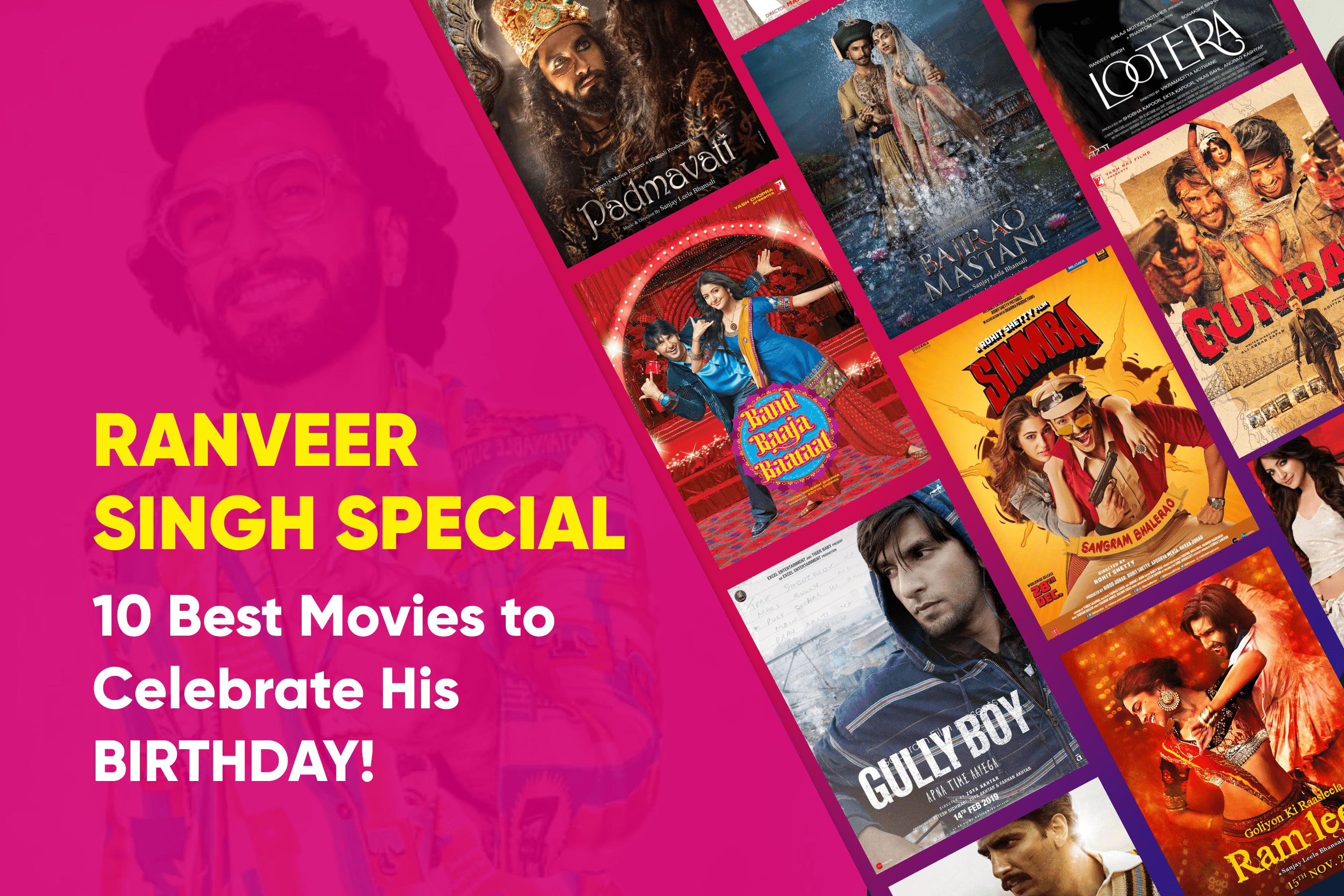 Ranveer Singh, as we all know, is one of the most versatile and enthusiastic actors in the Bollywood industry. One thing you can't deny about Ranveer Singh is that he exudes energy and enthusiasm 24/7. He's also a very humble human being who makes sure he interacts with the paparazzi and shows immense respect for his co-stars on interviews and sets.

Ranveer Singh, like most children, spent his childhood dancing to Bollywood songs and dreaming of becoming an actor. That dream came true with his debut movie, Band Baja Baarat, where he received a lot of praise and positive comments. From there on, it's been quite a journey for him, in Bollywood. We've curated a list of the best Ranveer Singh movies that you must binge-watch in celebration of his birthday. So, let's get started!

Top Ranveer Singh Movies That You Must Watch!

Band Baaja Baarat was Ranveer Singh's first film, his Bollywood debut. And yes, he did receive a lot of praise for his good acting skills as well as his dancing skills. First and foremost, the story revolves around Shruti and Bittu, who planned to start a wedding planning service as a profession, but things take a turn when Shruti eventually falls in love with Bittu. But they have to get their act together and realize that work always comes first. What do you think they would do? Anushka Sharma plays the role of Shruti, and she does an excellent job of keeping up with Ranveer Singh's energy.

Next recommendation for Ranveer Singh movies is Gully Boy, a film starring Ranveer Singh and one of the most versatile actors of the Bollywood industry, none other than Alia Bhatt. Ranveer Singh plays a street rapper who aspires to compete in one of the most prestigious rap competitions to gain name and fame. But he does face many challenges, although eventually wins the competition and shines as a successful rapper. The film was also nominated as India's official entry in the category of International Feature Film at the 92nd Academy Awards (also known as the Oscars).

Everyone adores Deepika Padukone and Ranveer Singh together, and it's easy to see why: they're not only an amazing on-screen couple but also one of the most hardworking and dapper couples in real life. Ram Leela stars Deepika Padukone and Ranveer Singh as love interests, who are in love but are unable to be together because their families have been at war for over 500 years. An Indian Romeo-Juliet, if there ever was one! Ram Leela was one of the most critically acclaimed films, and it was well-received by the audience.

The next recommendation under Ranveer Singh movies is Bajirao Mastani, a historical drama. It stars Ranveer Singh, Deepika Padukone, and Priyanka Chopra, three of Bollywood's most well-known actors. The heroic Peshwa Bajirao, married to Kashibai, falls in love with Mastani who is a warrior. Despite the chaos and conservative perceptions from their families, they want to make their love work, but fate has other plans.

Our next recommendation under Ranveer Singh movies is Padmaavat, directed by Sanjay Leela Bhansali, starring Deepika Padukone, Ranveer Singh, Priyanka Chopra & Shahid Kapoor. In an old Indian tale, an army attack was launched by a Mughal warrior, Alauddin Khilji, to capture Queen Padmavati, taken by her beauty. Meanwhile, her husband, Maharaja Ratan Singh, mobilizes his forces not only to defend his kingdom but also to reclaim his wife. Also, it is said that Ranveer Singh locked himself in an apartment to prepare for the role of Alauddin Khilji, one of the most famous historical figures, which is why you must watch his epic acting now.

Gunday is a film starring Ranveer Singh and Arjun Kapoor as childhood friends named Bikram and Bala who want to take over the coal mafia. But they appear to fall in love with the same woman, played by Priyanka Chopra, but in the end, they must sacrifice and go through the rift. Gunday shows exemplary chemistry between Ranveer Singh and Arjun Kapoor.

The next Ranveer Singh Movie is Lootera, starring Ranveer Singh and Sonakshi Sinha in the lead roles. It also features Vikrant Massey, one of the most well-known actors in the Bollywood industry. Lootera is about a woman named Pakhi who falls in love with an archaeologist, but she is unaware that he appears to be leading another life, which could potentially cause danger to their relationship.

India won the cricket cup in 1983, solely thanks to a man by the name of Kapil Dev. The movie 83 is about Kapil Dev and the early challenges and hard work that led to him being one of the most well-known cricket players in the world. The actor who portrays Kapil Dev, Ranveer Singh, has done an excellent job of conveying the concept that 1983 was the year that truly altered Indian cricket history. 83 is the ideal film to watch right now if you are a lover of cricket and want to revisit that world cup feeling.

Jayeshbhai Jordaar which stars Ranveer Singh, Shalini Pandey, Boman Irani & others, is a spirited, jolly drama-comedy revolving around the theme of female foeticide. The movie mainly revolves around Jayesh who runs away from his patriarchal family, with his wife and daughter, to welcome his second daughter into the world. The family, along with the support of others, faces hurdles and comes through them, happy and hearty. Watch this one of a kind Ranveer Singh movie, now on Amazon prime.

Last but not least, Simba is listed as one of the best Ranveer Singh movies. The protagonist of the film is Simba, a corrupt police officer who works for a smuggler named Dhruva. But as time goes on, his life changes when he meets Shagun, who was abducted by Dhruva’s brothers.

The next upcoming Ranveer Singh movie is called Cirkus, which is directed by Rohit Shetty. Ranveer Singh, Jacqueline Fernandez, Deepika Padukone, and many others have been added to the list of actors who are part of the movie. When it comes to directing a blockbuster, Rohit Shetty undoubtedly has a long history of that, which is why he has cast a huge number of top actors, who will provide another success. The first poster of the movie is out and is scheduled to premiere in 2023 December 2022.

Next is Karan Johar's Rocky Aur Rani Ki Prem Kahani, which stars Ranveer Singh and Alia Bhatt as the leads. Rocky Aur Rani Ki Prem Kahani is scheduled for release in 2023, although there haven't been any official trailers released as of yet. However the audience seems to be enjoying Ranveer and Alia Bhatt's friendship and on-screen chemistry, we can only hope that a new story will be told.

1. What was Ranveer Singh's first movie?

2. What is Ranveer Singh's best movie?

Well, if you ask us, Padmavat, in which he portrays Alauddin Khilji, is Ranveer Singh's best film. He put so much effort into his preparation to portray Alauddin Khilji, and it is shown in his exceptional performance.

3. Why is Ranveer Singh so famous?

Ranveer Singh's versatility and adaptability as an actor allow him to easily slip into all types of characters thanks to his dedication to acting and hard work. He has come a long way and demonstrated to audiences his ability to shapeshift into whatever avatar that he has offered, from portraying this young boy in Band Baja Baarat to playing Alauddin Khilji and Padmaavat he sure has come a long way!

4. Does Ranveer Singh have a filmy background?

Despite his family not having a background in film, Ranveer Singh has always been a tremendous lover of Bollywood music and has been dancing to its beats since a very young age. He only earned the name he has now as a result of his dedication to acting and hard work.