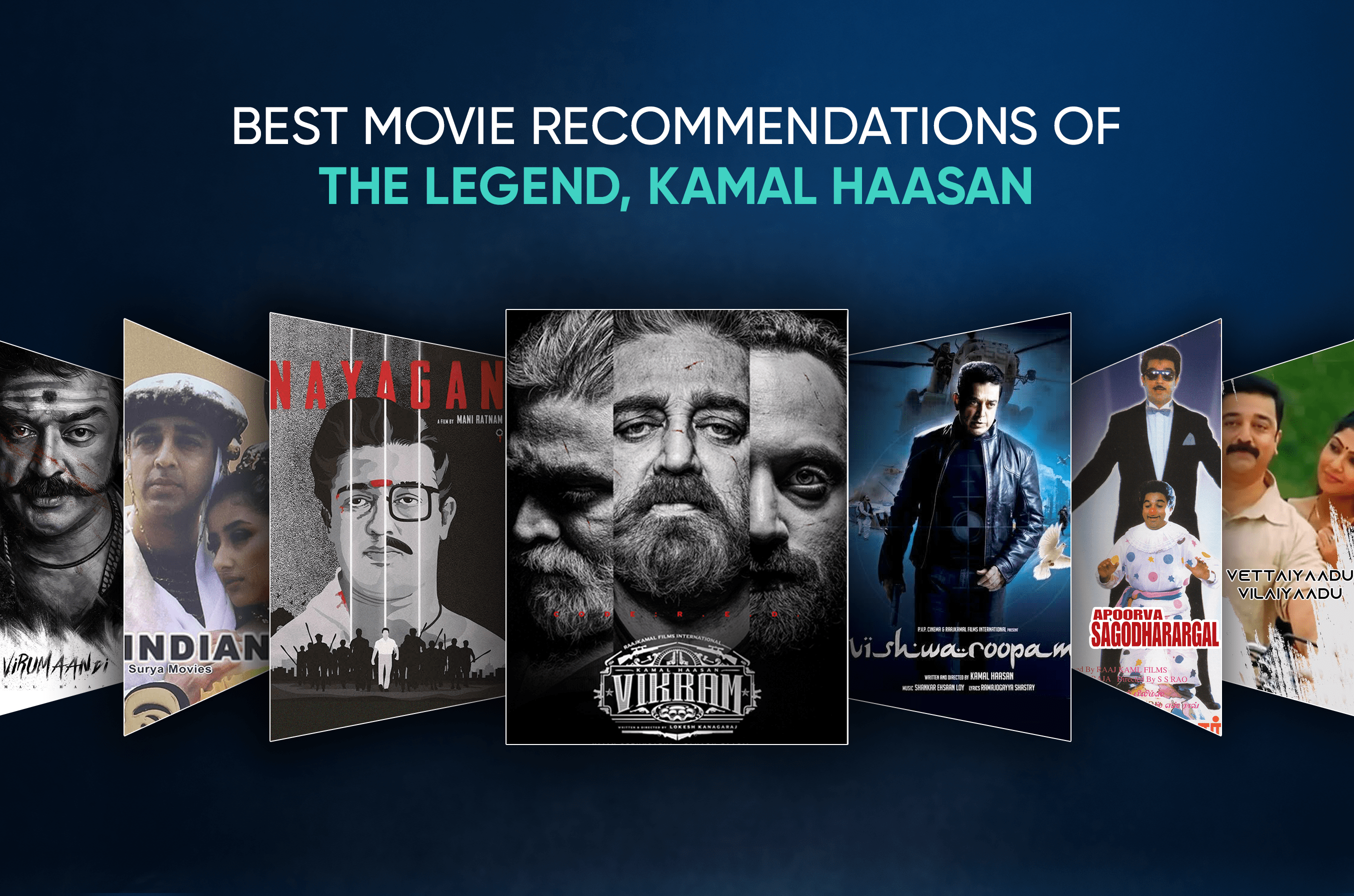 We're back with another blog, but this time it's all about Ulagnayan Kamal Haasan, who is now ruling the box office with his outstanding comeback. As we all know, he is one of the most well-known performers in the Tamil film industry, and the rest of the globe.

With his recent blockbuster release, we can see that his followers still hold him in high regard and love, and have been waiting for his return for a long time. So, for those of you who have already seen the film Vikram in theaters, you have a full weekend ahead of you to catch up on Kamal Haasan's early acting days. If you haven't seen Vikram, we strongly advise you to do so before reading this, as you will be blown away by this legendary actor's performance and will come back to watch all these Kamal Haasan Movies!

Nayagan is the first recommendation under Kamal Haasan Movies on our list. This 1987 film was directed by none other than Mani Ratnam, the most renowned director of the South Indian film industry. It also stars the talented Saranya Ponvannan. The plot revolves around Velu Nayagan, who witnessed the brutal killing of his father by corrupt policemen in the city of Mumbai. As a result, he becomes a gangster and attempts to avenge the people who killed his father and destroyed his family.

Mahanadi is our next recommendation for famous Kamal Haasan films. The film was released in 1994 and was co-written by Kamal Haasan. The music for the film was composed by none other than Ilaiyaraaja. The plot revolves around a simple family man who is tricked into an illegal business and faces imprisonment. He faces many difficulties while his family awaits him outside, but once he is out, he faces harsh reality and societal pressures that many incarcerated individuals have faced, after serving their sentence.

The next recommendation under Kamal Haasan Movies on the list is Apoorva Sagodharargal, a 1989 film directed by Srinivasa Rao. The title implies “brothers in arms”, which is precisely what this film is about. The plot centers around a police officer who is honest and up to date on his duties, but who pays a high price when he interferes with a bunch of crooks. As years pass by, his young son named Appu, grows up to avenge his father, and he also has a twin who is wrongly caught by the cops mistaking him for Appu.

Our next suggestion under Kamal Haasan Movies has received a lot of applause even to this day. It's a 1996 film directed by Mani Ratnam, with music by A.R. Rahman. Indian is based on a veteran who previously served in the Indian army and decides to address the corrupt people's wrongdoings. He catches town pastors, police officers, and other people who take bribes and don't fulfill their jobs rightfully. This film is quite gripping, and you must see Kamal Haasan's outstanding performance in it.

Viswaroopam is a film directed by Kamal Haasan, which was released in 2013. The music for this movie is by Shankar Ehsaan Loy, one of the best musical trios in the world, so you know you're in for a treat. The film is about a woman named Nirupama who is studying in the United States and marries a dance master named Viswanathan. She finds out that he is engaging in some suspicious activity due to his behaviour and employs a detective to discover his genuine identity and who he is. Watch this recommendation under the best Kamal Haasan Movies now!

6. Vikram - In theatres near you

The next Kamal Haasan Movie  in our list of the best Kamal Haasan movies has recently become the buzz of the town. His return has instilled such a sense of anticipation among the audience that the response to this film has been phenomenal. Vikram is a film that was released in June 2022 and is based on a serial murder investigation. Amar, played by Kamal Haasan, is the detective who investigates all of these serial crimes. When it comes to honest and powerful acting, Kamal Haasan never fails to captivate, which is why you must see Vikram in theatres right now.

Virumandi is next under Kamal Haasan Movies that was released in the year 2004, and what makes it unique is that it is supposed to be a movie that has gory images with a riveting message. The plot centers on a reporter who encounters Virumandi. It's about a time when he was sentenced to prison for a crime he didn't commit. Virumandi gives us a glimpse into his prior life, which was full of hardships, brutal murders, and momentsthat landed him and his family in serious jeopardy.

Dasavatharam is a Tamil word that signifies “Ten Characters”, which is also the idea of this next recommendation under Kamal Haasan Movies. When it was initially released in 2008, it was one of Kamal Haasan's most anticipated comeback films. It is about a scientist who is trying to defend the world from the dangers of a bioweapon. However, it has reached India by accident, posing a serious threat that must be addressed immediately. In the film Dasavatharam, Kamal Haasan portrays a total of ten different characters. And you'll only be able to crack these characters once you watch the movie.

Our next recommendation under Kamal Haasan Movies stars Kamal Haasan and Jyothika, one of the most lovable duos in cinema who have brought their own charisma on screen. The film, which was released in 2006, follows Raghavan, a police officer, as he attempts to track down a serial murderer who is responsible for the murder of his friend's daughter. Raghavan then sets off for New York to find out who the killer is; in the meantime, he meets Jyothika in New York, who assists him.

Last but not least, among the top Kamal Haasan movies, Apoorva Raagangal is our next pick. This is a classic film starring Kamal Haasan that was released in 1975. It has some of the best Tamil songs which are incredibly melodic to listen to. The plot centers around a young man who falls in love with an older woman and the two decide to marry. However, their lives become more difficult when he realizes that his father is in love with the woman's daughter.

The first Kamal Haasan Movie under comedy to make it to the top of the list is none other than Panchathantiram. KS Ravikumar directed this film, which was co-written by Kamal Haasan. It was released in 2002, and the plot centers around a group of four married friends and one single buddy who may be on the verge of marrying, but they all become entangled in a murder mystery, as well as the smuggling of missing diamonds. This film will undoubtedly tickle your funny bones, and the cast is something you should keep an eye on as it stars some of the best actors such as Kamal Haasan, Yogi Sai, Shriman, Nagesh, Jayaram, Ramya Krishnan, Simran, etc.

Vasool Raja M.B.B.S is next on the list under Kamal Haasan Best Comedy Movies. This is a remake of the Sanjay Dutt-starring Hindi film Munnabhai MBBS. Kamal Haasan, Prabhu, and others star in the Tamil version. The story centers around a Goon named Rajaraman who wants to enroll in a Medical College to fulfill his father's dream, but because of his occupation and past activities, he breaks the college's norms, which doesn't go well with the college authorities. Again, this Kamal Haasan Best Comedy Movie is guaranteed to make you laugh out loud, which is exactly why you should see it right away!

Mrs. Doubtfire, a well-known English film, served as inspiration for our next Kamal Haasan Movie that is Avvai Shanmugi. The plot centers around a simple boy named Madan who marries Janaki, the daughter of a wealthy Brahmin family, but Janaki is unable to deal with middle-class life and decides to divorce Madan and raise their daughter. But Madan, who is still in love with her, disguises himself as a woman and pretends to be a nanny in order to stay near her and care for her.

Michael Madan Kamarajan is our next comedy Kamal Haasan Movie. This is a film that you and your family will enjoy viewing together and laughing heartily at. The film was released in 1990, and the music was composed by none other than Ilaiyaraaja, the maestro of music. The plot centers around how a father divides a set of quadruplets after they are born, with one being taken home while the other three are placed in other homes. Things take a fresh turn when all four children meet one another over time.

Last but not least, Pammal K Sambandam is one of the best comedy films starring Kamal Haasan. Kamal Haasan and Simran appear as the main leads in this film, which was released in 2002. The plot centers around Sambandam, who visits Doctor Janaki to have heart surgery performed on him. Doctor Janaki, on the other hand, leaves her wristwatch in Sambandam’s stomach by accident. Yes, you heard that right. When you watch this film, you will discover a lot of twists and turns, so what are you waiting for?

We hope you're excited to see all of these Kamal Haasan Movies, which are sure to pump up your adrenaline. Let's honor Kamal Haasan by viewing all of his best films, which are sure to make you smile while also possibly awaken the south fire in you. We'll be back with more articles to keep you up to date on the latest entertainment news; till then, HAPPY FLEEKING!

1. How many films has Kamal acted in?

Kamal Haasan has acted in almost 230 films in his 60 years of career in acting.

2. What is Kamal Haasan last movie?

Vikram is Kamal Haasan's latest movie, which was released on June 2022

3. Which is Kamal Haasan best movie?

Kamal Haasan best movie so far has to be INDIAN.

4. Which Kamal movies nominated for an Oscar?

Kamal Haasan being the legend he is, has movies such as Indian, Nayagan, Kuruthipunal, Thevar Magan, Saagar etc. are some of the movies that are nominated for an Oscar.