Remarkable Ranbir Kapoor Movies That You Must Watch

Ranbir Kapoor has done some commendable work in indian cinema. In this blog we celebrate some of the best works done by Ranbir Kapoor and his upcoming movies. Know more! 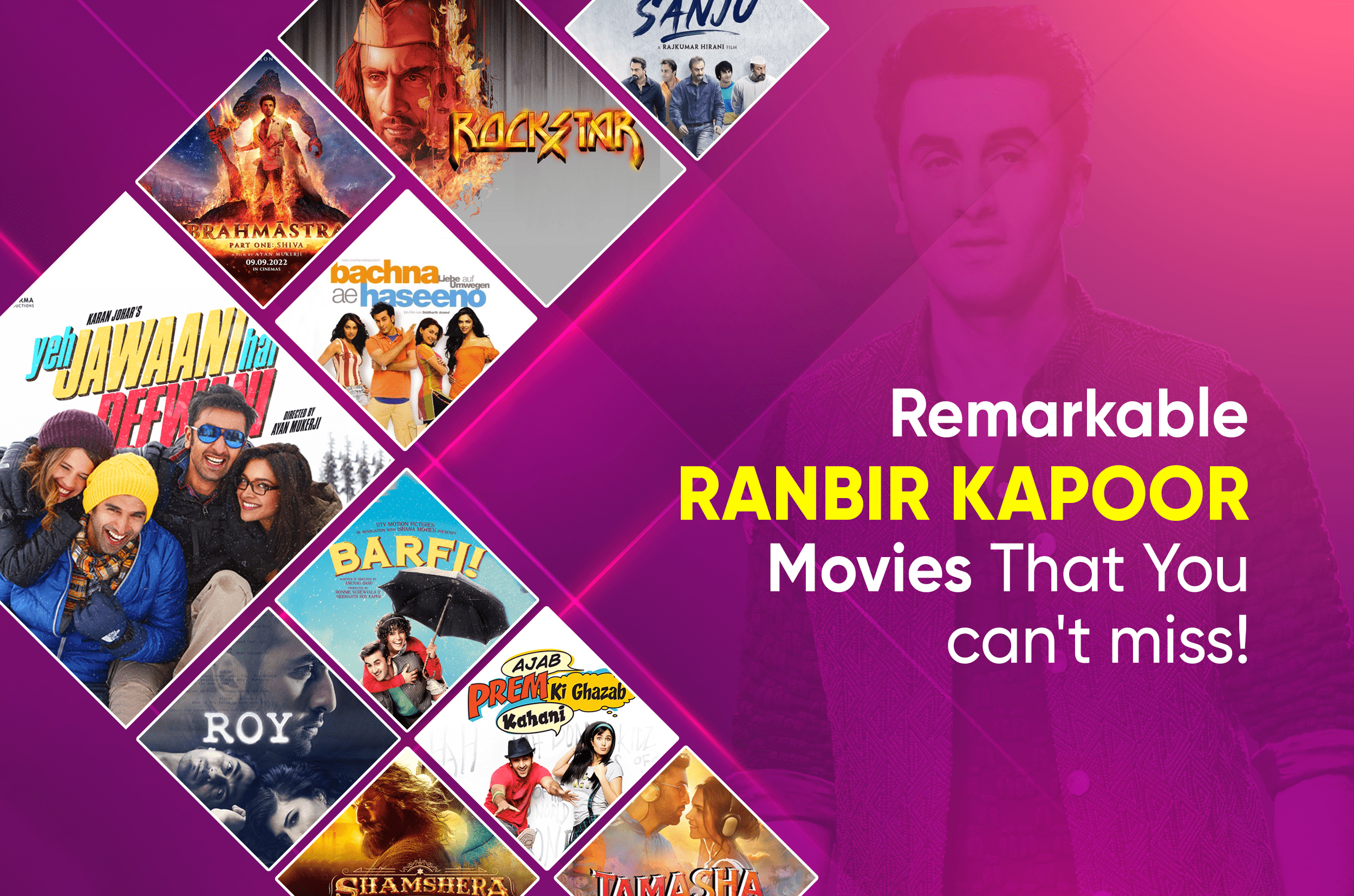 Apart from being in the spotlight since he was a child due to his father, Ranbir Kapoor has gained a separate fan base by proving that his acting skills are what make him Ranbir Kapoor! As his beloved lady love Alia Bhatt mentioned, he is also an undeniable secret romantic who keeps her on her toes with loving gestures!

Ranbir Kapoor has undoubtedly made some successful films, particularly Shamsheera and Bhramastra, which are currently gaining popularity. Aside from these two highly anticipated films, we have selected some of the best films that will showcase his best side as an actor.

Iss dil ka main, Ab kya karoon! Don't we all relate to this song from Barfi?

Stealing your hearts is Barfi, a hearing impaired man who falls in love with Shruti, but she marries someone else and later discovers that Barfi is now in love with an autistic girl! After discovering this, Shurthi begins to reflect on her own marriage and she wishes to meet Barfi. What you should not miss is Priyanka Chopra's impeccable acting as Jhilmil, an autistic girl, and she does every bit of justice to the role!

Holi, or no Holi, Balam Pichkari lives in our minds, rent free!

One thing other than the storyline about this next movie is definitely the songs.Yeh Jawani Hai Deewani stars Ranbir Kapoor and Deepika Padukone,who have starkly different personalities but they meet on a trekking trip where Naina falls in love with Kabir. But Kabir tends to drift away because he is afraid of commitment. We have also been Kabir in our lives at one point or are we still?

Sanjay Dutt is more than just an actor. He is Legend!

And no one else will ever be like him. However no one wanted this biopic on Sanju Baba, we needed it!

Ranbir Kapoor gives an outstanding performance as Sanjay Dutt, depicting his various struggles not only in Bollywood but also in his personal life. It became one of the highest-grossing films in Bollywood, and if you are a true fan of Sanjay Dutt, you must watch this right away!!

Okay, let's not use this as a platform to discuss love storiyaan, but we feel you!

Brahmastra is one of the most anticipated films, set to be released on September 9th, 2022 and starring Alia Bhatt, Ranbir Kapoor, Amitabh Bachchan, Shahrukh Khan, and other movie stars who are extremely popular. This film is also directed by Ayan Mukerji and of course a high-budget film. The film is based on Astrauniverse. Book your calendars and wait for Brahmastra now!

Rockstar songs > the entire world! There we said it!

The amount of calmness provided by these movie songs is unmatched, and they were composed by none other than A. R. Rahman. The plot revolves around Janardan, a college student who wishes to awaken the musician within him. He seems to achieve this goal after experiencing heartbreak which also leads to a path of insanity. Ranbir Kapoor and Nargis Fakhri do an excellent job of bringing these characters to life.

Talk about a triple threat, and Bachna Ae Haseeno is at the top of the list!

Raj, like any other youngster, enjoys traveling around the world. On his quest to see the world, he is drawn to two women whom he cannot resist! But when he returns, he meets Gayatri, played by Deepika Padukone, and they both begin to grow closer in time. He feels at ease with Gayatri, but he is concerned that his previous relationships with the other two girls will come back to haunt him.

Bahut Ajeeb Ho tum! No, not you, but this is one of the most famous lines from the film Roy!

The plot revolves around Kabir, a casanova film maker who meets a London-based director named Ayesha and falls in love with her right away. That's one aspect of the not-so-ajeeb story XD. The other part of the story is that Roy is a mysterious international art thief who arrives in a foreign country to steal an expensive painting but only discovers a sudden twist to it.

As the name implies, love stories have their own unique spin on them. Ranbir Kapoor and Katrina Kaif, ironically are playing the lead roles in the film which throws a shadow on their real life ghazab kahani maybe? Our next suggestion is based on Prem, who has feelings for Jenny, who appears to already have a boyfriend named Rahul. But, like any other person who has faced one side of love, Prem agrees to assist her in marrying Rahul, and the rest is history.

Following that, we have another highly anticipated film, Shamshera. Starring Ranbir Kapoor, Sanjay Dutt, Vaani Kapoor, and many other celebrities. The film is scheduled to be released on July 22nd 2022, so mark your calendars. Ranbir Kapoor plays dual characters in the film and that's all we have for now in the trailers; We don't want to ruin the suspense, so tune in to watch Shamsheera!

Tamasha is the next recommendation we have for you. This Ranbir Kapoor and Deepika Padukone starrer film is based on Ved and Tara who are on a vacation in Corsica and eventually fall in love with each other. But they retain their true identities as secrets. When Tara returns to Delhi she bumps into Ved and realizes that Ved has changed and is still searching for his true self.

Ranbir Kapoor has undoubtedly made an identity for himself in the movie industry.  There are many stars who actually love the way Ranbir gives his full dedication to making a character work. Keeping the hype on Alia Bhatt low for a while, we hope you watch these amazing movies by Ranbir Kapoor and binge through a slow weekend!

1. Which is Ranbir Kapoor's best movie?

If you ask us, we would pick Barfi! Ranbir Kapoor has played the role of a hearing impaired man and brings the character to life! The chemistry between him and Priyanka Chopra along with Ileana’s presence is another reason why we pick this as one of Ranbir Kapoor’s top movies.

2. How many movies has Ranbir Kapoor done?

Ranbir Kapoor has at least done 27+ movies in Bollywood out of which we have curated the best 10 movies, do give them a watch!

3. Which was Ranbir Kapoor’s first movie?

Ranbir Kapoor’s debut movie was Saawariya opposite Sonam Kapoor which was released in 2007.

Sanju is by far one of Ranbir Kapoor’s best movies, which is a biopic of Sanjay Dutt which was released in 2018. The film made a whooping 34.75 cr!