10 Incredible Movies Based On True Stories

Looking to watch movies based on true stories? We have curated this list of top 10 movies that are based on true events and are totally worth your time. Learn More! 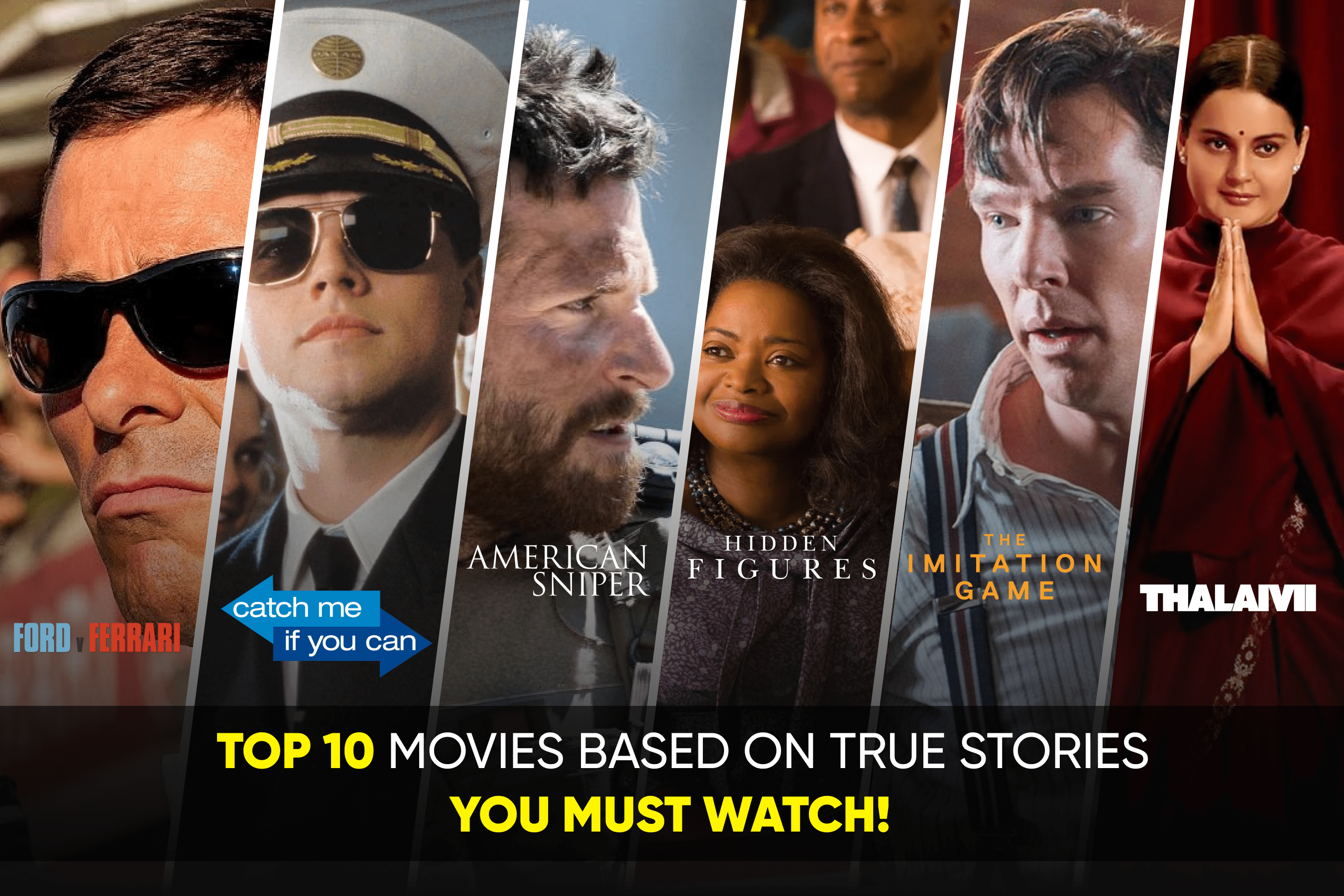 Let’s face it! We’re all suckers for a great success story - and it’s always great whenever we come across a real life one. People enjoy movies based on true stories or movies inspired by well-known personalities because they depict the hardships that real people face and are also highly relatable to everyday life. They hit home and rekindle the flame amongst us all which is a reason, a lot of people keep coming back to watch these movies. At the end of the day, we’re all seeking inspiration from someone else’s success or experience.

Here we bring you a list of 10 brilliant movies based on true stories to awaken those goosebumps in you and pump up your adrenaline to keep you moving forward in life!

The story of Carroll Shelby and Ken Miles in the 1966 Le Mans in France is one for the ages and when we put in two absolute superstars in their roles - you’re nearly always in for a real treat! Ford vs Ferrari dives deep into the age-old rivalry between two of the biggest race car manufacturers in the world - based on real life incidents which happened back in 1966. A must-watch for racing fans - Ken Miles’ journey from a hot-headed brilliant race card driver to the new Ford GT’s main rider at Le Mans is an inspiring watch.

Make sure you have a box of tissues you can reach out to from time to time. Especially in the end.

If con films were art, Catch Me If You Can would probably be priceless! Read that again.

Forrest Gump meets Jordan Belfort in this era-defining Cat-and-Mouse thriller in 2002 directed by Steven Spielberg. Based on the life of Frank Abagnale, a talented forger/bank robber and con artist - Catch me If You Can takes viewers through his real life exploits and run-ins with FBI agent named Carl Hanratty who becomes obsessed in his quest to catch the conman!

Stellar acts by Leonardo Di Caprio, Tom Hanks and Christopher Walken definitely puts this movie at the top of your watch list.

The next film on the list of movies based on true stories is Bradley Cooper's Netflix original, American Sniper. The story is about Chris Kyle, an expert sniper who is returning from the war in Iraq but finds it impossible to forget the horrors he witnessed there. This in turn starts to have an impact on his marital and personal life, which has a very negative impact on him.

American Sniper makes up for the perfect watch for someone to understand how much trauma people at war undergo through and how the scars of war can continue to sting even long after they’ve left the battlefield.

Our next suggestion for movies based on true stories is Hidden Figures, which is currently streaming on Hotstar.

It is also based on a true story about female African- American mathematicians who play a crucial role in John Glenn's launch into space while also dealing with racial and gender discrimination at work. They had to overcome all of these challenges to be recognized for their dedication. Great performances by Taraji P. Henson, Octavia Spencer, Janelle Monae, and other actors highlight the significance of this film and the resounding message it conveys.

The Imitation Game starring Kiera Nightingale and Benedict Cumberbatch is our next recommendation for movies based on true stories. Additionally, it is based on the biography Alan Turing 1983, a historical drama that was based on a genuine story. The plot centers on Allan, a British mathematician who joins the cryptographic team to decode a German code. With the assistance of his fellow mathematicians, Allan can create a device that can decipher the code.

If you’re from India, close your eyes and listen to ‘Lehra Do’ from 83 and you’re bound to get a little misty in a minute or two!

For a country that breathes cricket, winning the 1983 Cricket World Cup is a source of pride we all carry. And Kapil Dev was the hero we all worship. What veteran director Kabir Khan did was make sure that everyone who wasn’t a part of the celebration then, gets to relive it once again now. Brilliant cast. Excellent direction and great use of past footage and anecdotes makes 83 a brilliant watch - sports fan or otherwise.

What we loved? Jacques Taylor as the chewing grinding legendary Viv Richards was absolutely ‘on fleek’! And Ranveer Singh as Kapil Dev of course!

Enjoy movies with a socio-political angle?

Next up in our list of movies based on true stories, we have Thalaivi - a film based on Jayalalitha, one of the most well-known politicians and actresses of the late 1980s! In the movie, Kangana Ranaut (Jayalalitha) and Arvind Swamy (MGR) do a fantastic job together. The film is based on the life of Jayalalitha, who was not only an actress but also a very effective politician who won the hearts of millions of people and assisted them in numerous ways to achieve their goals. She too had her fair share of challenges along the way and the movie goes on to show how she overcame them to become one of the most era defining figures from the South.

You’ve heard the song! If you haven’t watched the move yet then it’s time you do!

Vikram Batra is a legendary name when it comes to the bravest soldier who have ever served the country and the story of his exploits in the Kargil war will be one none of us will ever get tired of hearing. Siddharth Malhotra does absolute justice to the role in what has been one of the best biographical movies in Hindi cinema for quite some time now! Great supporting acts from Kiara Advani and Nikitin Dheer in addition to a moving soundtrack make Shershaah an absolute must watch.

We can’t make a Top Ten list on movies based on real life without mentioning this Vicky Kaushal blockbuster, can we?

The Indian army’s surgical strike in Pakistani terror camps led by Major Vihaan Shergill became the most talked about national topic in 2016 and Uri-The Surgical Strike became a cult movie as soon as it hit screens in 2019.

Shergill, a member of the Indian Army, has been tasked with leading an operation against a group of militants who are to blame for the attack that took place in Kashmir and resulted in the deaths of numerous soldiers. Uri - The surgical strike was able to capture the true essence of this event, and it was appropriately called the biggest hit of the year making it among the movies based on true stories.

The revolutionary Mark Zuckerberg was just a 19 year-old sophomore at Harvard University when he had the idea of a social media platform that would connect students at Harvard. And the rest as we know it is history. And it’s not even ‘meta’phorical!

Jesse Eisenberg’s brilliant portrayal of the Facebook founder’s journey makes sure The Social Network is never a dull watch even with all the tech talk and Eisenberg’s weird super-fast accent. If you live your life on Facebook and don’t know the story of how it came about yet, then this is the movie for you.

Real life stories are relatable to people. Because they remind people of the greatness which people are capable of and in turn of the greatness everyone carries inside themselves! Movies based on true stories are always a breath of fresh air from the usual monotony of fiction which is why biographies are one of the most watched pieces of content today.

We hope you get the inspiration you need from these dramas based on real life in your weekend binging sessions as you get ready to get back to the hustle next Monday!

1. What are movies based on true stories called?

Dramas based on real life incidents are called ‘Biographies’. They capture the true story of an event that has happened for real.

2. What is the best movie based on a True Story?

3. Which Horror Movie is based on a true story?

A few well-known horror films based on horrible actual incidents are The Amityville Horror and The Exorcist.