Highest Grossing Indian Movies Ever Made! 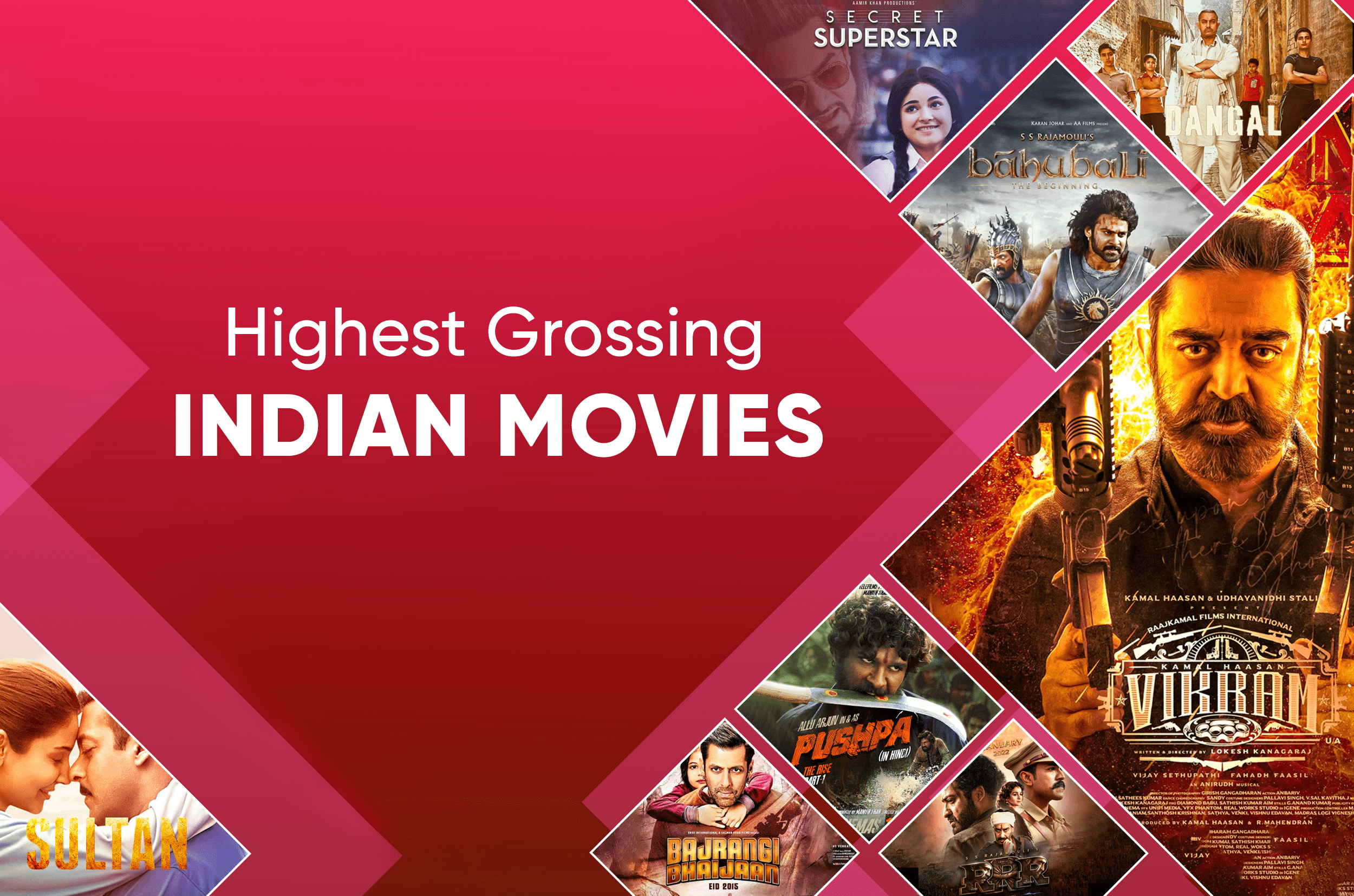 There is no doubt about the wonders of Indian cinema. However, there have been some blockbuster movies that have stood the test of time as the highest grossing movies of all time. We have compiled a list of some of the all-time movies that have grossed over 100 crores. These movies are not only popular in India, but are also widely accepted and acclaimed around the world. It's time for you to see these blockbusters right now.

Aamir Khan is known for having a greater comeback than a setback. He comes with his blockbuster movies once in a while and why they make a lot of money is not just because he is Aamir Khan but also because he has an eye to pick up great storylines that are not the mundane concepts that you see in every other movie. He also introduces a streamline of new actors that are so talented. Dangal is one such film, and it tells the story of Mahavir Singh Phogat, a former wrestler who must fulfill his dream of winning a gold medal by training his daughters for the Commonwealth Games. He has to deal with the social stigmas and other things that society imposes on them. Dangal is the all-time blockbuster film, grossing over ₹2,024 crore at the box office alone.

You can't compete with SS Rajamouli and his magic. There isn't a single actor who hasn't wished to be cast in a Rajamouli film because of his brilliant direction and extravagant story writing. Excellency, as well as the type of thought that was in the storyline of Bahubali certainly turned a lot of heads, not just in India but also around the world. In addition, there are also notable actors such as Prabhas, Anushka Sharma, Rana Daggubati, Tamanna Ramya Krishnan and many others who helped make this movie a big success! Bahubali is based on a medieval Indian drama about Amarendra and Ballaladeva's rivalry. This film was popular because of the sets that were built after a lot of hard work and was one of the most expensive Indian films ever made. Oh and not to forget that it made a whooping ₹1800 crore at the box office.

It all started with “Salam Rocky Bhai” and the rest is history!

KGF 2 starring the Kannada industry's most versatile actor Yash has created a separate fan base in fact a separate entity for itself. Fans have gone and are still going gaga over just the mention of KGF. All thanks to Prashanth Neel’s mastermind of directing this one-of-a-kind movie revolving around Kolar Gold Fields and a gangster who will rain over the new government and take control. Yash has perfectly fit the role to make this film a blockbuster hit. Sanjay Dutt, Srinidhi Shetty, and Raveena Tandon are also part of this movie. KGF 1 discusses Rocky Bhai's life history, while KGF 2 depicts the aftermath of what occurred. This is yet another film that has grossed over ₹1200 crore at the box office.

Two of the top dancers in the movie industry are still making people tap their toes to the all-time favorite Naatu Naatu song.

Apart from the plot of the film, another reason apart from Ram Charan and NTR Jr is the fact that Alia Bhatt and Ajay Devgn make cameo appearances. They also perform the role so expertly that they make this movie a dream come true. Rajamouli's mastery is another reason why everyone is talking about it. The plot centers on a Revolutionary and an officer in the British force who decides to join the forces and get justice in hand. The movie made over ₹1200 crores at the box office, and it continues to rank among the top-grossing movies made in Indian cinema history.

With over ₹965 crores grossing worldwide this is one of the movies that you should definitely watch if you are someone who wants to understand what to do with your dreams. As already mentioned, Aamir Khan manages to make movies that are not mundane . This movie is about an ambitious girl who dreams of becoming a singer but her father does not allow her to do so. Aamir Khan also looks dashing in this film, and his dancing in the song "Sexy Baliye" is superb!

Bajrangi Bhaijaan is one of the biggest blockbusters ever made, partly because it stars the all-time favorite Salman Khan, but it also has an amazing cast that includes Harshali Malhotra, Nawazuddin Siddiqui, Kareena Kapoor, Om Puri Etc. Released in 2015, it is still regarded as one of the greatest films in terms of box office earnings. The story revolves around Pawan Kumar Chaturvedi and his journey to take a mute 6-year-old Pakistani Muslim girl back to her hometown. What you should not miss is the impeccable chemistry between Salman Khan and the little girl and the highlight about this movie is also the stunning location of Kashmir where it was shot in. This movie grossed over ₹969 crore at the box office.

Phew! There are a lot of Aamir Khan movies on the top-grossing list.

But, hey, we already warned you about his meticulous selection of films in order to provide the audience with only the best. Next up is PK, which was one of the most anticipated films in 2014. This film, directed by Rajkumar Hirani, grossed over ₹854 crores at the box office. It introduces Aamir Khan as PK, Anushka Sharma as Jagat, and also has the star amongst the stars, Sushant Singh Rajput, who will be remembered. Not to forget Sanjay Datt, whose on-screen charisma is unrivaled. The plot revolves around an alien who lands on earth and loses his communication device, after which he meets a reporter to assist him in locating his device. This film is also known for posing many thought-provoking and reality-based questions, which you can only learn about if you watch PK.

Baahubali has definitely made its own name in the film industry, not only in India but also globally. It is one of the highest grossing Indian movies in the Indian Film Industry for not only screenplay but also for its direction. There are people who worked a lot to bring this movie to what it is right now even after 7 years and it still stands as one of the biggest films ever crossed. SS Rajamouli working his magic shows the kingdom of Mahavati in which Prabhas, Anushka Shetty, and Tamannaah are the lead actors, with a long list of other versatile actors who made this movie a mega-hit. From the music to the set, everything is spot on. This movie grossed over ₹1810 crores in the box office making it one of the biggest hits in the year 2017!

You can also hear the famous Pushpa dialogue “Thaggedhe Le” amongst small children to International cricketers. Pushpa earned over a hundred crores at the box office and is 2021s only super hit. The movie is about a laborer named Pushpa who creates enemies in order to gain control of the Sandalwood smuggling. Allu Arjun plays Pushpa, and people have fallen in love with his rugged appearance. The songs alone has received over a million views and is popular all over the world making it fall rightly under the highest grossing Indian movies. It's available on Amazon Prime India.

Come on get on the floor and do your “Jag ghoomeya” step!

Last but not least, there is Sultan. Another Salman Khan film that has done well at the box office. Salman Khan and Anushka Sharma have definitely shown their chemistry, as well as bringing the right spirit to the movie which was directed by Ali Abbas Zafar. It revolves around Sultan Ali, a middle-aged wrestler who gives up sports due to the death of his son. Years later, he wants to revive his career from a wrestler to an MMA fighter. Apart from being a Salman Khan film, this film has succeeded due to its storyline and the prominent theme of sports.

Vikram is undoubtedly one of the most anticipated films in the Tamil film industry and is yet another highest grossing Indian movie. It stars none other than Kamal Hassan also known as Ulaga Nayagan. This film marked Kamal Haasan's return to the film industry after a long gap, and it did wonders for him. It grosses over 400 crores worldwide, making it one of the highest-grossing films ever made in the Indian film industry. The plot revolves around Vikram, who leads a team of black-ops agents tasked with tracking down a group of serial killers who have infiltrated the society. The only difference is that this is done in the Kamal Haasan style, which means you're in for a treat.

From time to time, movies will achieve the success that it deserves, and perhaps in the future, we will see some other movies join the Hundred Crore Club and stand tall among these movies that are the highest grossing Indian movies ever made. We will return with something interesting and engaging to read until then let’s get binging!