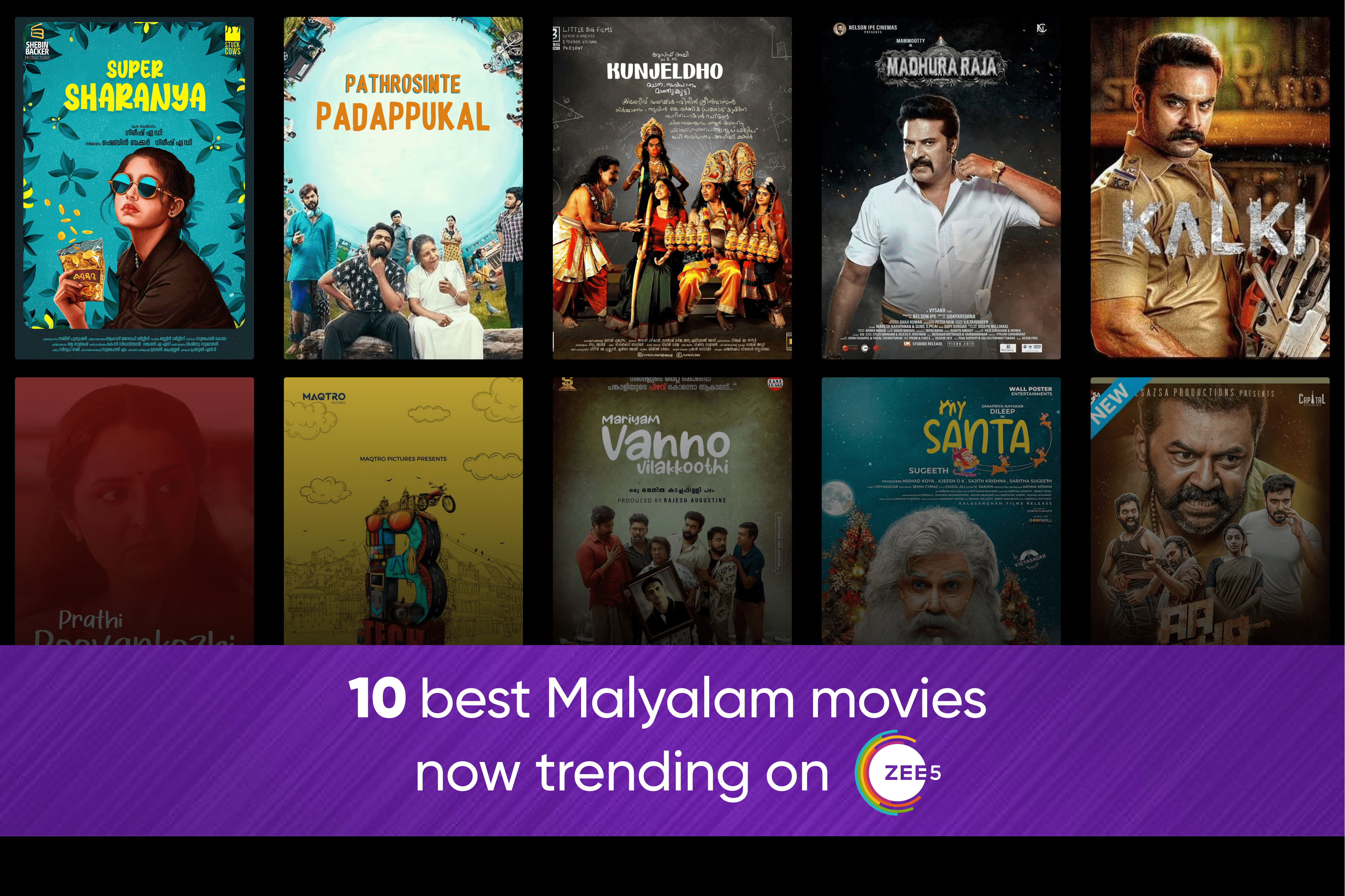 ‘OTT platforms’ have taken the nation by craze! And with entertainment literally at the tip of everyone’s fingertips every single individual is spoilt for choice when it comes to watch to watch each time they sit down with that remote!

Zee5 has established itself as one of the top OTT platforms in the country and one of its most popular features has been its library of regional Indian content. So if you swear by South Indian movies and Malayalam movies get you excited, this is THE platform for you!

With the coronavirus pandemic and the extended stay-at-home period for the entire nation, people started experimenting with the content they consumed with a majority of Indian viewers taking interest in movies in a different language - especially in South India!

Thanks to polished subtitles, quicker internet, and a variety of streaming sites Malayalam movies started gaining immense popularity among the masses with some really great content coming in from the industry! Malayalam cinema's films are renowned for their cinematography and realistic storylines. Elippathayam won the Sutherland Trophy at the 1982 London Film Festival and the British Film Institute's award for Most Original Imaginative Film of 1982. India officially submitted three Malayalam films for the Best Foreign Language Film Oscar category: Lijo Jose Pellissery's Jallikkattu (2019), Adaminte Makan Abu (2011), and Guru (1997) by Rajiv Anchal.

Let’s start with super Sharanya. This is based on a girl who is extremely introverted and moves to Thrissur to pursue her dream to become an engineer. Like everyone else who relocates, she discovers that adjusting to her new surroundings and college life is what she finds most challenging. You will surely be able to if you have relocated from a different place away from home when you watch Super Saranya now!

Tovino Thomas That's it! That is all there is to know about Kalki, Combined with an engaging plot.

On which the movie is based, a brave policeman seeks to learn the truth about what occurred. He encounters numerous challenges from cunning politicians who pose a serious threat to him and wreak complete havoc in the city. It’s Kalki’s duty to bring about peace.

Before anything Prathi Poovankozhi, translates to “Accused Rooster”, Which is where the brilliant irony comes in. This light Comedy movie is about an ordinary saleswoman who lives alone with her mother. But she also has a very personal story in your head. After years of living and suffering of being accused by a sexual predator she started to be on the lookout for the predator who ruined her life?

The name Mamooty is enough to keep you interested & tuned in on the edge of your seat, because he only delivers the best of the best films. Madhura Raja is about a respected village chief Raja Narasimha who is on a mission to rescue his elder brother who has been charged with a crime he did not commit. But, as usual, there are twists and turns. Things escalate when he comes across an illegal liquor dealer.

Total chaos is the perfect word to describe our next film. Pathrose, who lives in his house with his wife and four children, who all have a character added with madness on their own. They go about their daily lives like any other family. But when Pathrose’ mother comes into the picture there's even more chaos in their daily lives. How will this family deal with another person, especially one much older than them?

This is your typical love story that begins with a college romance and lasts a lifetime. The movie shows Kunjeldho and Nivedita, who are madly in love. In a series of unfortunate events, the couple becomes pregnant and completely shatters their families and the future that they hoped for.

Will it come to an end?

What happens in college is a memory that you will carry with you for the rest of your life. Period!

The following recommendation depicts a group of engineering students. Who are now based in Bangalore and try to fit In the city, but also attempting to adapt to the various realities of life while juggling college obligations. If you want to relive your college days, B-tech is unquestionably the film to watch today.

Let's be honest here, we love films that depict a lifetime of friendship. And this is exactly what the next suggestion is about. It’s based on three inseparable friends who have known each other since childhood and end up working at the same company. Yes, how lucky!!. But they end up inviting trouble when they have a very wild party with their colleagues This movie falls perfectly into the comedy thriller genre. Watch it right now!

Santa Claus is on his way to town. If not in town, he’s most likely to be available on ZEE5!

The following film recommendation is a comedy drama about a Christmas film. Now. Who doesn't enjoy the holiday season? And you don't have to be a Christian to celebrate Christmas because everyone, regardless of religion, loves Christmas. The plot revolves around a young girl who was involved in an accident that killed her father, mother, and grandmother. Her grandfather plays the part of Santa and promises to grant all of her wishes.

Last but not least, there's Ahha. If you're looking for sports movies, especially in Malayalam, this is the right film. A widower who decides to coach a team of tug of war champions, also discovers that he has a unique passion for sports. Watch this film and perhaps you will discover your true passion maybe?

1.Which are the highest rated IMDB Malayalam movies?

2. Where else can I stream Malayalam movies?

3. Why are Malayalam movies the best?

Malayalam films rarely flaunt their glitz and star power but focus more on storytelling and the character depth. Numerous films with lower profile actors have done exceptionally well amongst the audience and critics! The absence of huge spending budgets and flashy PR activity give way to a more detailed filmmaking and film watching experience!

4. Which is the best OTT platform for Malayalam movies?

We don't take sides, but Zee5 is unquestionably the best OTT platform for Malayalam movies with a wide range of libraries to choose from.