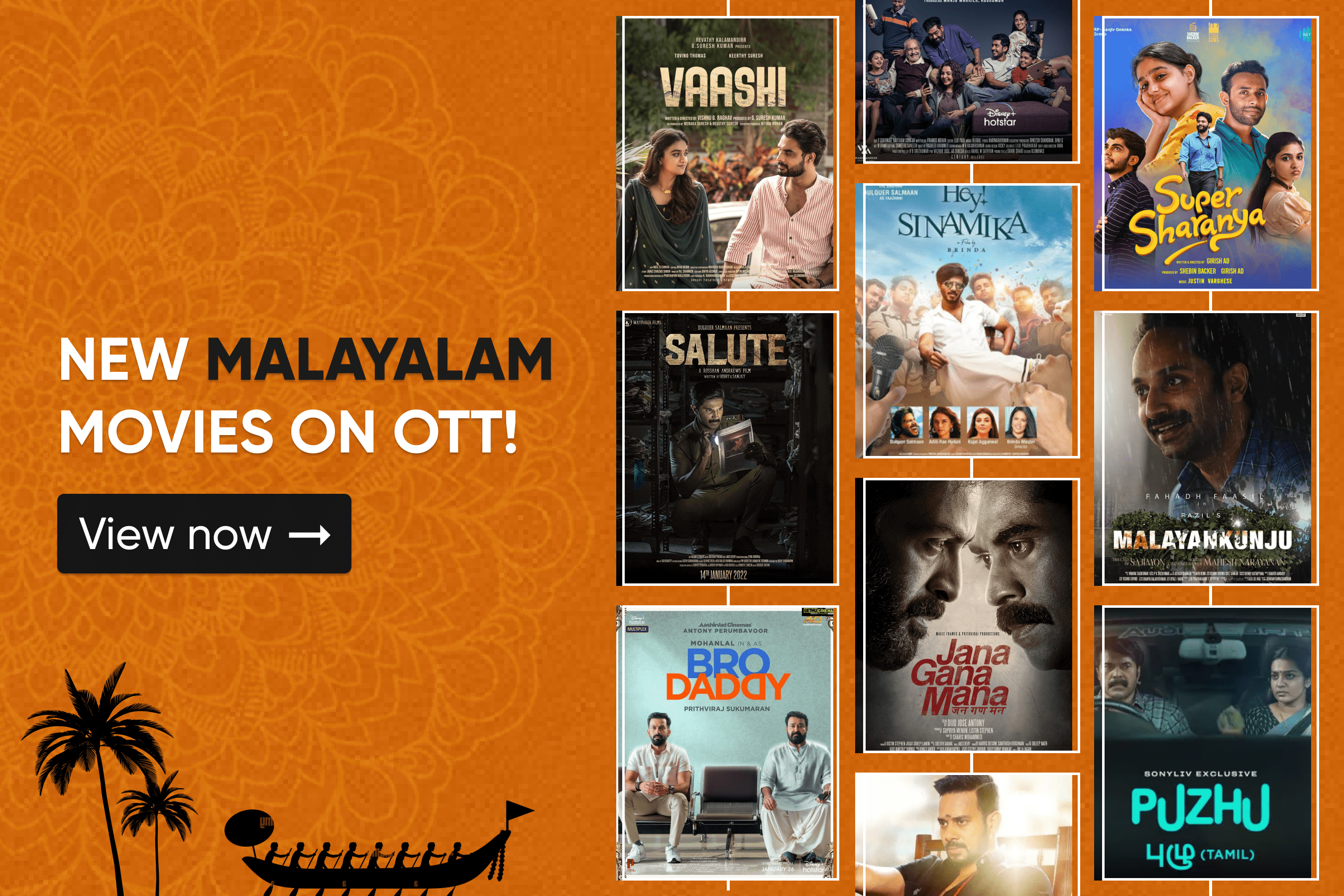 It doesn’t matter if you don't understand Malayalam as long as you have your favourite hero and subtitles. The Malayalam industry is definitely booming in terms of providing you with the best story lines as well as the best selection of actors. Not only that but they are also not creating the same story lines but have a certain twist and turn that keeps the audience in anticipation. From Prithviraj to Mohanlal we have curated some of the best movies that you should definitely not miss out on as well as a selection of the upcoming movies that you should definitely watch out for!

There is no doubt that Mammootty is one of the most loved people in the Kerala film industry.

Puzhu is a Malayalam language psychological drama that was released in 2022. It is based on a relationship between a father and son and all of the underlying dynamics and trust issues that they have. It's safe to say that Mammootty has aged like fine wine in this film and has done his best to bring out the story. He is joined by other talented actors such as Parvati and Malavika Menon. What you should look out for in this film is Mammootty's electrifying acting skills.

Don't even get us started on Dulquer Salmaan's massive fan base.

Salute is a Malayalam language crime thriller starring none other than Dulquer Salman. He is also accompanied by one of the most versatile casts, contributing to the film's success. The movie revolves around a police officer who is haunted by an old case that has been left unsolved. It is his responsibility to solve the mystery while also bringing justice to the limelight. What you should not miss in this film is Dulquer Salmaan's outstanding performance as a cop.

Keerthy Suresh has always won hearts with her versatile acting and charm, but her outstanding performance as a lawyer in this film is outstanding! Paired with Tovino Thomas, one of Kerala's most handsome hunks, and not to mention his acting abilities. The movie is based on a courtroom drama where two self-made lawyers are determined to win a case but they are on opposing sides. Apart from the courtroom direction, one thing to look forward to in this film is the group chemistry following Tovino Thomas and Keerthy Suresh as Rivals and a cute couple. It's one of the best malayalam movies on OTT.

This is exactly what this film is about, and it stars two of Malayalam's most talented actors, Prithviraj and Mohanlal. They play the roles of father and son in the film. The movie revolves around the life of a family man where unexpected things happen at home and are left to the father and brother to take care of the house. Both Prithviraj and Mohan Lal cover the complex emotions of a father and a son extremely well; it's a perfect example of fathers being our first heroes and brothers serving as protective shields.

He's either stealing hearts with his stunning dancing performance or playing a lawyer; there's no in-between.

Jana Gana Mana is yet another movie that stars the amazing Prithviraj and the ever versatile Suraj Venjarmoodu. It's about a college professor who was brutally murdered, causing a sense of unrest among the students. Meanwhile, the court must launch an investigation to determine who is the true perpetrator of these heinous crimes. This includes the lawyer who is doing everything possible to bring justice to the courtroom. Like the title of the film, the idea of the film is to bring justice to the people while also serving only the best of the country and its citizens.

Tovino Thomas in Thallumaala is all you need to watch right now. This film was released on August 12, 2022, and was highly anticipated, especially by Tovino Thomas fans. The story revolves around a youngster and his life deviation. In addition, there is also incredible music and outstanding BGM. Kalyani Priyadarshan stars the female lead alongside Tovino Thomas in this film, and this movie is sure to get your adrenaline pumping.

Yet another movie by Prithviraj, this one is called Kaduva and is based on the life of a young high-ranking officer who works for the Kerala police and how he has to go through crimes and suspects. What you should look out for in this film is that Vivek Oberoi plays an IPS officer, and we all know what kind of striking actor Vivek Oberoi is. The combination of Prithviraj and Vivek is unquestionably a good one, so if you're looking for some exciting action Malayalam film on ott, this is your best bet.

What happens when three siblings live in the same house? A lot of support along with a lot of chaos.

Next up is Lalitam Sundaram, which is about three siblings who have lost touch with their family due to their hectic lifestyles. When they are finally reunited on their mother's death anniversary, there is a chance that they will bring back their lost love. However, this is not as simple as it sounds because rekindling that love could be difficult. This film's cast includes Manju Warrier, Deepti Sati, Anu Mohan and many more, and it's a feel-good film that raises your emotions and makes you want to spend more time with your family.

What can we say about Fahad Fazil? He is a striking actor with an amazing personality who can easily fit any character.It is also safe to say that is one of the most possessed gems of the Malayalam film industry in terms of acting and here he has yet another challenging role in MalayanKunju which is based on a terrible landslide in Kerala and how an ill-tempered electrician played by Fahad Fazil seems to get disrupted with his neighbors newborn baby who triggers some unforgettable memories from his past which have led to be one of the reasons for his trauma to peak up. A.R Rahman is the maestro behind this movie’s music, enough to know you’re in for a treat!

Last but not least, we have Super Saranya, which is based on Sharanya, a shy and introverted person, and moves to Thrissur to pursue her dream of becoming an engineer while also finding it difficult to cope with the new surroundings and college life since she is now away from home. This film depicts all aspects of new college life, new friends, and everything else that you would have seen as a young teenager. If you're looking for a movie to watch over the weekend, Super Sharanya is your best bet.

Mei Hoom Moosa, an Indian Malayalam language film based on the life of Moosa, an ex-military man, is set to be released on September 30th, 2022. The trailer has already piqued the audience's interest, and this will undoubtedly be one of the most thrilling films of the year. Suresh Gopi is playing the lead, and you can't go wrong with that choice.

Alone, which is set to be released on October 4th, 2022,  is a Malayalam language thriller film starring Mohanlal as Kalidas, who appears to be the only prominent actor cast in the film. Based on the character Kalidas, who is played by Mohanlal, travels from Coimbatore to Kerala during a pandemic lockdown and finds himself stuck all alone. What we can definitely look forward to as viewers is Mohanlal's impeccable acting.

Eesho is a Malayalam language thriller film that will be released on October 5, 2022, and stars Jayasurya and Namitha Pramod in the lead roles. Looking at the trailer, we can expect another gripping story about a serial killer on the loose. And also it's about time we recognised Jayasurya for his exceptional acting abilities.

Chattambi, which is set to be released on September 23rd, 2022, stars Srinath Bassi, Grace Antony, and many others in the lead roles, and has a lot of people excited after seeing the trailer. The film is based on the lives of a few people who cross paths with each other and change their lives forever. But only after watching Chattambi will you know whether it’s in a good or bad way.

There are no more excuses when it comes to finding entertainment as we have come up with a weekly list of the best movies that have been the talk of the town. We will come back and continue this weekly ritual of providing you with the best movies, so hold onto your binge seats and let the entertainment begin!