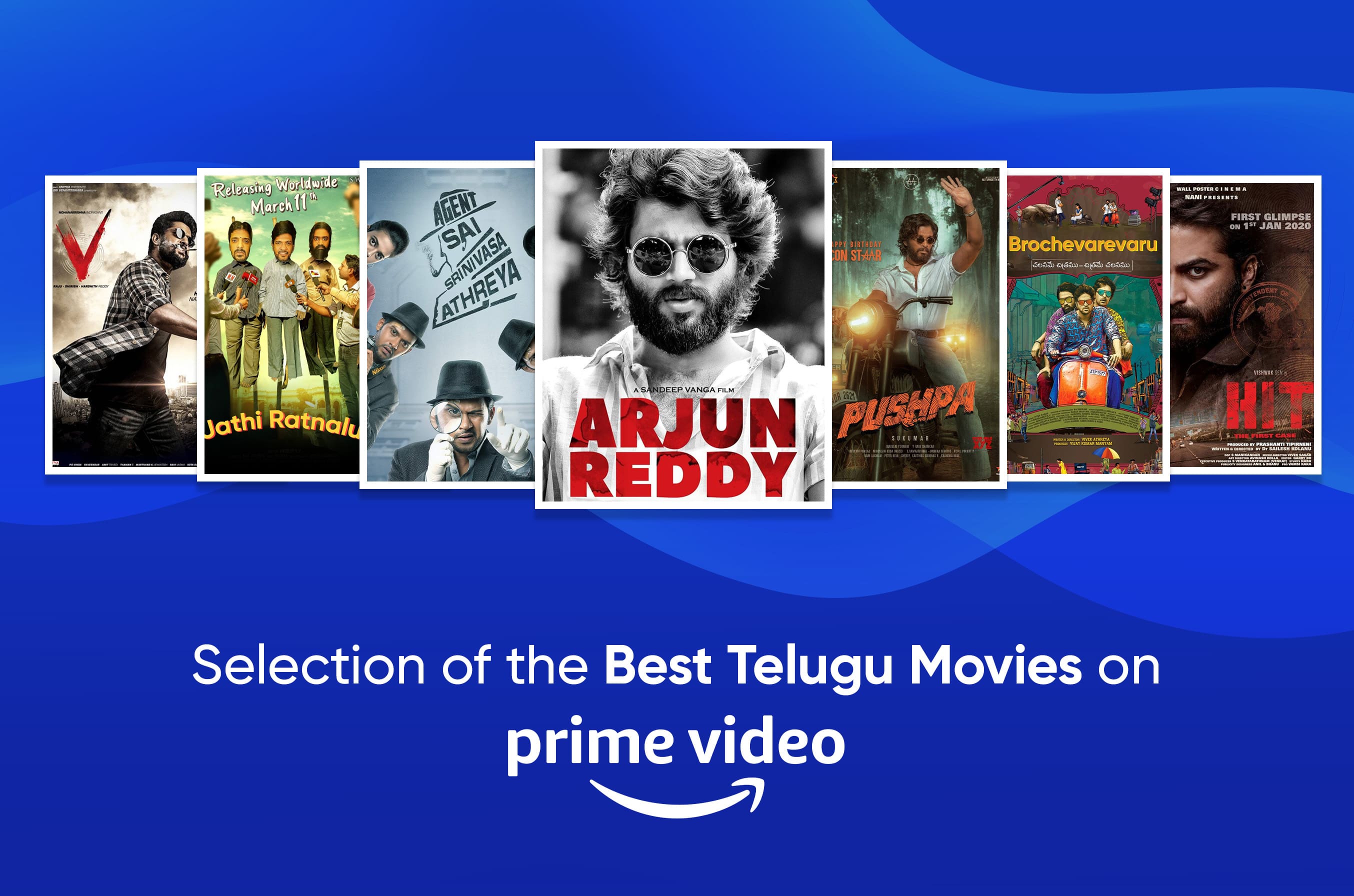 If you are new to Prime and looking to watch the best Tollywood movies, you’re in the right place. We have curated a  list of the best Telugu movies on Amazon Prime, handpicked just for you.

The Tollywood film industry has grown immensely in the last five years. With blockbuster movies like Baahubali, Pushpa and Arjun Reddy - Telugu films have garnered a lot of popularity in the country with more and more people from different demographics showing interest towards these films.

The industry has also been successful in giving us some of the best actors in cinema such as Allu Arjun, Prabhas, NTR Jr. Mahesh Babu and Vijay Devarakonda. The immense love towards the industry has bought in a massive audience who tune in to watch and relive these best Telugu movies on Amazon Prime.

First in line on the list of best Telugu movies on Amazon Prime is a heartwarming story and a classic example of the ups and downs of friendship. Starring Naveen Pollishetty, Priyadarshi, and Rahul Ramakrishna, this movie follows the lives of the three friends when they finally decide to move from the suburbs to the city. This movie always keeps you on the edge and keeps you laughing with its quirky humor and is a must watch.

Next up in our kitty of the best Telugu movies on Amazon Prime is not your run-of-the-mill comedy or rom-com. Boasting a cast with the likes of Sri Vishnu, Nivetha Thomas, Rahul Ramakrishna and Nivetha Pethuraj this movie kicks off with the story of three friends who fail in their exams and waste their time befriending a girl in their college. Things take a wild turn in this crime comedy drama which makes it a great watch for all the crime aficionado out there who love a laugh.

If you're the kind of person who likes action and is into sophisticated plots, V is the movie for you. Starring Nani in his first ever antagonistic role in his career and Sudheer Babu- this movie is about the showdown between a well known cop and a serial killer who challenges the cop to nab him. With plenty of WTF moments in the movie, V is a must watch every fast-paced movie buff looking for a thrill ride!

How would it be to wake up and suddenly find yourself in Goa?

If you like comedy movies with a typical plot, back story and cheesy climax then this one is the exact opposite to it which is what makes this movie so good. Ee nagaraniki emaindi is probably the best movie to watch together with your friends. The plot is very simple: 4 friends get together after ages for a bachelor party as one of them is getting married. Things get outta hand and the next morning as they end up in Goa. What happens next is the whole plot of the movie.

The Hangover vibes, anyone?

Do we hear you humming "Srivalli" under your breath?

Perhaps one of Allu Arjun’s best works, Puspa definitely does make it to the  list of the best Telugu movies on Amazon Prime! A story based on true events on the red sandalwood smuggling in the district of Chittoor, Pushpa, a laborer makes a steady climb up the ladders in the world of red sandalwood smuggling. Making enemies along his way. But havoc wreaks on his efficient system when the police start to sniff around his business. A well-set plot, great script and an amazing DSP backed background score makes Pushpa a must watch.

Who’s the one guy who could end up potentially spoiling Sara Ali Khan and Janvhi Kapoor’s friendship?

Devarakonda's best work so far - Arjun Reddy has gone on to become a milestone film in the South even having its own Bollywood remake with Shahid Kapoor some years back! Revolving around hot-headed brilliant medical resident Arjun and his love for a girl in his medical college, Devarakonda absolutely kills it with his gritty performance with a good supporting act Shalini Pandey.

Disclaimer: Try and NOT watch this movie with your parents. Or in-laws!

The plot is about a private detective, who runs his own agency, solves menial cases with the help of his assistant. However, things take a serious turn when a client comes to him with a case of his daughter's murder.

If you are the kind of thriller fanatic who hates flashy things in serious thriller movies, this one is definitely for you. Agent Sai Srinivasa Athreya has zero irrelevant plotlines with the entire screen time focused on the plot and how to keep you hooked.

Perfect movie for a saturday night!

Yet another masterpiece delivered by Adivi Shesh

Evaru is the kind of movie which has multiple plot twists and climaxes which would leave you perplexed at the end of the watch. The movie follows Shesh in the role of a police inspector who gets caught up in a case of shooting in self defense and decides to take up the investigation!

On starting the cop begins to encounter dark and untapped secrets tied to his past. If you don’t have goosebumps yet, you surely will at the end of the movie.

This coming of age adult comedy is one of the quirkiest entries in the list of the best Telugu movies on Amazon Prime and is yet another must watch with your friends.

Starring a young cast featuring the likes of Tejus, Medishetti Abhinav, Tej Kurapatti and Dinesh Tej this movie revolves around four friends making a decision to follow their heart and live on their own terms. However, their actions have consequences. With multiple heartbreaks and obstacles the movie shows unpredictable turns of life and makes it even more interesting when one of them falls into a big fix!

If you’re a fan of the Kingsmen movies - this Telugu action thriller would be right up your alley!

The movie starts off with Gopi played by Adivi who is recruited into RAW(Research and Analysis Wing), but on his graduation day, he is implicated in a plot to kill two RAW officials. Declared a wanted terrorist, Gopi fights to clear his name and find the people responsible. But that's not all, somehow the fight against the terrorists seemed to be connected with his blurry past and he finds astonishing discoveries by digging deeper.

The movie is action packed with numerous plot twists and is a must watch if you’re into fast paced action thrillers.

Don't you want someone who trusts you no matter where life takes us?

Our next recommendation for best Telugu movies on Amazon Prime is Chitralahari is based on a young man who was supposed to build an app to help people avoid road accidents, but he lies to his girlfriend about having a part-time job. What will happen when she discovers the truth? Will she accept that he is doing this for a good cause, or will she leave him because he is still building his work? Watch this underrated Telugu movie on Amazon Prime!

The remake of a Malayalam classic ‘Anjamalay Diaries’  , Vishwak Sen, Saloni Mishra and Harshita Gaur starrer Falaknuma Das in the next movie on our list.

The plot of this action thriller movie is based on a group of youngsters with a flamboyant team lead who attempt to monopolize a meat business located in Falaknuma. However, things are not as easy as they seem as the gang gets pulled into a world of crime and encounters many roadblocks in their attempts.

Perfect for a light starter movie to kick things off on a Sunday afternoon!

What do you get when you add a dash of Prakash Jha and Tamannah to a Daggupathi Venkatesh movie? A Tollywood blockbuster, of course!

Next up on the list of best Telugu movies on Amazon Prime is a hilarious outing of two friends in Europe who want to control their wives after their respective marriages but due to time and difference of attitude they end up in hilarious situations that just as the name suggests!

F2 makes for a great light-hearted watch and would definitely crack you up time and again during it’s course.

Tasked with the investigation of a missing girl, HIT follows the story of a cop from the homicide department played by the ever-so-popular Vishwak Sen. An underrated action thriller, it delves deeper into the tragic past of the protagonist which serves as an obstacle in his attempts to solve the case.

What’s more, the premise of the movie was so strong that there's a sequel slated to come out soon along with a Bollywood remake starring Rajkummar Rao and Sanya Malhotra.

If you make it past watching the entire list of movies we have made above, we’re positive youd like at least half of them for sure. With subtitles, watching content in a different language has become much easier today which also helps us widen our horizons based on the kind of content we consume. Grab your family,friends or spouse and have a ball of a weekend enjoying these fantastic Telugu films loaded with action, humor, and love.

Hold on to your binge seats and let the movies begin!

1. Which OTT platform is the best for Telugu movies?

If you ask us, one of the best OTTs with Telugu movies of the curated collection of blockbusters is undoubtedly Amazon Prime Video. They also have a lot of trending Telugu content that you should check out.

2. Which movie has the highest rating in Telugu?

Without a doubt, the Baahubali movies have the highest rating in the Telugu film industry along with the highest commercial collection record boasting of around a whopping 1,810 Crores.

3. Is Tollywood bigger than Bollywood?

Both the Telugu and Tamil industries have mesmerized their audience with some smashing filmmaking over the years, so it’s really not fair or logical to draw comparison here. If you’re looking for the best deals to watch your favourite content down south, don’t forget to check out all the great offers and bundles on Fleek.