20 Best Telugu Movies On Aha to Watch this Weekend 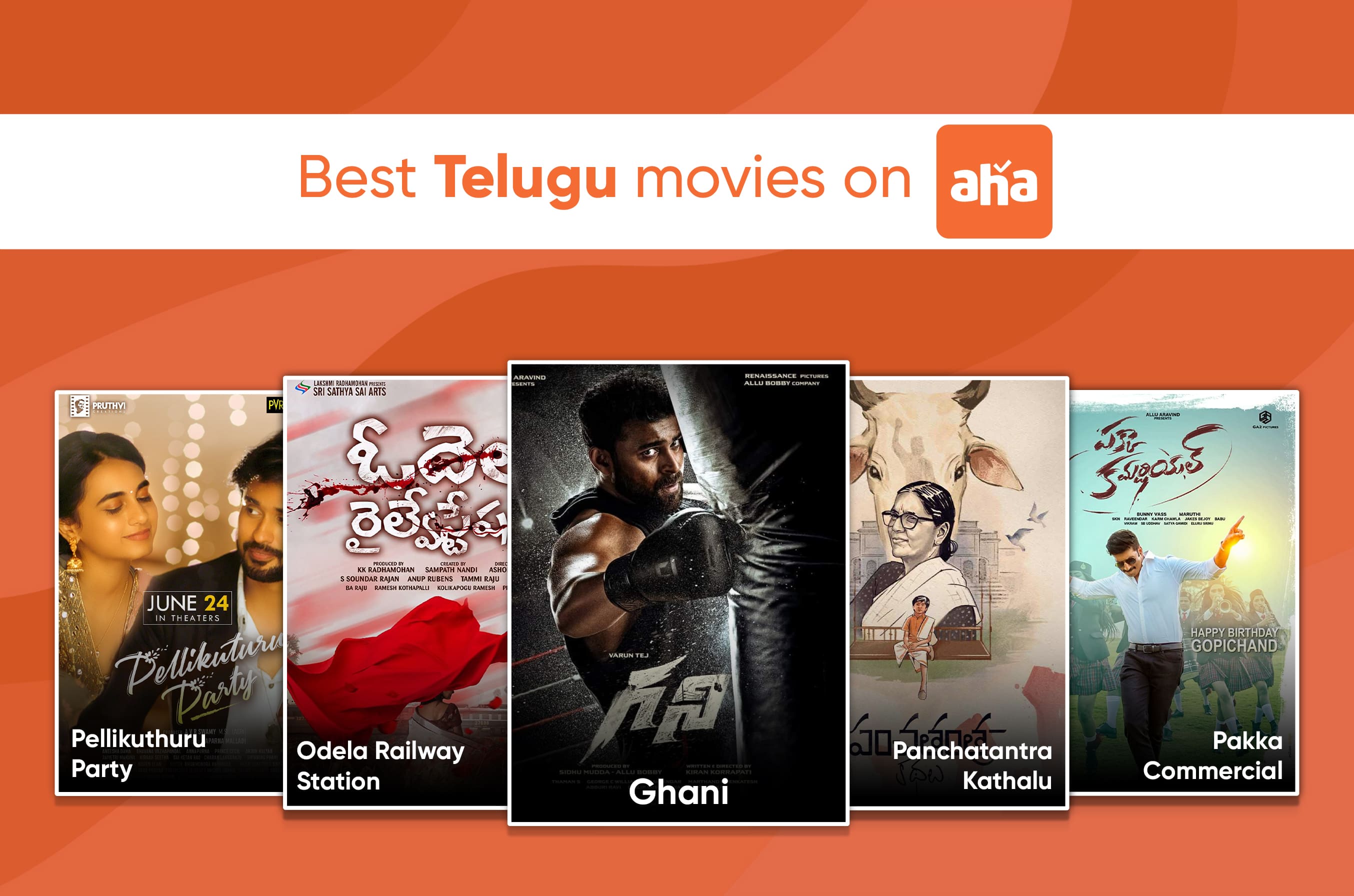 Have you run out of ideas for what to do this weekend? We have the ideal Binge list of the best Telugu movies available on Aha. Whether it's Ravi Teja's action or Pawan Kalyan's super action or  Mahesh Babu's charm to Nithya Menon's adorable acting skills, we've compiled a list of some of the best telugu movies on aha you shouldn't miss!

First up, Panchatantra Kathalu is a film that is a collaboration of five different stories in one film. There are some stories on chaotic love, an elderly woman's decision to live alone and many more stories that you can relate to. There are also some of the most well-known Telugu actors who have given their all to bring these five stories to life.

Pellikuthuru party is a fun movie that you will definitely enjoy. It rightly fits under the comedy genre and is about a Bachelorette party that takes a detour but only in a fun way. It's based on a younger sister who tries to sabotage her older sister's marriage. This is a film that you will undoubtedly enjoy watching with your siblings.

Odela Railway Station is a highly anticipated movie. It is a crime thriller movie with a lot of suspense and climax. It is set in Odela, a small town in Telangana, and depicts the atrocities that the small village is subjected to. What you should definitely notice are the various elements of crime that this film covers, such as social interaction, sex education, idolism, and so on.

Ghani, which was also released in 2022, stars Saiee Manjrekar, a rising star in the Telugu industry. It also stars the most versatile Bollywood actor, Sunil Shetty. The cast and crew are all fantastic, but let's get to the plot. The plot revolves around the life of a boxer who has been passionate about his dream since he was a child, but his life changes due to unavoidable circumstances.

Pakka commercial stars Rashi Khanna and Gopichand in the lead roles. The movie has a very nice concept that revolves around a lawyer who takes on a notorious client who has his own messy past. Rashi Khanna plays the role of a lawyer, and this character eventually becomes a love interest. But what you should really look forward to seeing in this film is the chemistry between the two, as well as the courtroom scenes.

DJ Tillu is yet another movie that has definitely won the box office. It revolves around a young lazy man and the cliche concept of him chasing girls until one incident changes his entire life and he becomes really good. The movie is very hilarious and has managed to catch the laughter among the audiences. but there could be a lot of repetitive scenes which you've already witnessed in many other movies.

Another classic Pawan Kalyan film Bheema Nayak is about a righteous police officer who encounters corruption and wants to put an end to it at any cost. You've probably seen a lot of movies about corruption and cops, but what you should really look forward to in Bheemla Nayak is Pawan Kalyan's action supremacy, Rana Dagubatti’s ruggedness and Nithya Menen's charm. This is also the remake of a Malayalam super hit Ayappanum Koshiyum.

Next up is Color Photo, which is based on two engineering students from completely different backgrounds who meet and fall in love with each other over the course of time but with a little twist. Don't miss out on the chemistry between these two actors and watch it now if you're looking for a  lighthearted film.

Fans of Mahesh Babu: Isn't a Telugu movie list incomplete without him? Athadu is based on a professional killer who has been hired to carry out a political assassination. However, after politicians are killed, he is accused of murder and must flee the Law using a false identity. The cast is especially impressive, with Mahesh Babu in the lead. Trisha, Sonu Sood, Brahmanandam and a slew of other movie stars make this an action packed movie!

Ram Charan has a massive fan base not only in the Telugu industry, but all over the world. Aside from his commendable acting abilities, he is well known as one of the most striking actors of the Telugu industry, and Magadheera is one such movie that is very prominent. It is a Telugu language fantasy fiction film based on Harsha, who recalls his life from a hundred years ago. If you enjoy fantasy, mystery & extravagant fiction, this is an excellent choice available on Aha.

Ravi Teja is the only person who can play the role of a versatile cop. He brings out the most amusing yet striking character of a crop that you simply cannot ignore. Krack is about three criminals who mess with a hot-tempered police officer, unaware that they will end up in jail if they do so. This film is also a box office success, which is yet another reason why you should watch it right away.

Are you the town's most eligible bachelor? Alright, let's avoid the subject of marriage for the time being.

This film was released in 2021 and is a romantic comedy film in which Harsha's mother introduces him to 20 potential brides but he falls in love with this one girl named Vibah. However, like any other couple, their love is put to the test when she challenges his views on marriage.

Hey, relax, we're not talking about the scary chant. This is another Telugu film about three best friends, who encounter unexpected events that lead to the discovery of evidence of a murder. What you should look forward to in this film is the climax and the integrating storyline of the twists and turns of events.

Next up is Super Over, a Telugu language crime thriller film that is based on Kasi and his friends who win their luck in cricket betting but have no idea that they have ended up in a troublesome way. What you should expect in this movie are unexpected events and turns leading to an unexpected ending.

This is one actor who can woo you with his exemplary acting skill every single time. Be it a hero or villain Vijay Sethupathi never fails to bring the bar down. Maha Manishi is  based on Radhakrishnan who is one of the most trustworthy individuals and wants a secure future for his children. However, he must first pass through a center for Real Estate Tycoons, who have different plans for him.

Another movie that had commercial success in the box office is Naandhi which is based on Surya who is an IT professional and is wrongly accused of high-profile Murder which lands him in prison and is waiting for trial. The movie also shows a courtroom drama which you definitely shouldn’t miss. This is one of the movies that has definitely raised the bar for movies that are based on Justice.

Even though it was released in 2016, this film continues to make you laugh even now. Selfie Raja is a remake of the Kannada film “Victory” , but it definitely has its own charm to it, especially since it has been remade in Telugu. The film was a huge success, and the story revolves around Raja, who runs into problems because he is addicted to selfies.

A S.S. Rajamouli’s masterpiece! Pretty sure most of you would watch this movie just to see what story could come up with a  house fly. Eega is based on the death of a young boy who is reincarnated as a fly. He wishes to get back with vengeance on those responsible for his death while also keeping a close eye on the love of his life. Nani and Samantha both perform admirably in this film, not to forget Kiccha Sudeep's acting as well!

Last but not least, we have Jalsa, which stars the very versatile Pawan Kalyan in the lead role and is based on Sanjay, a young man who had a difficult childhood. However, a Police man comes into contact with him as a guiding light and leads him to a better path, and he eventually falls in love with his daughter. Find out what’s hiding behind this chaos by watching Jalsa right now.

What are your plans for the weekend? Looks like we’ve already made plans for you to watch these amazing Telugu movies this weekend!  Stop what you're doing and get the binge party started. We'll be back with more movie suggestions soon; in the meantime, stay calm and Fleek on.

1. What movies are there in Aha?

Aha has a large collection of Tamil and Telugu language movies. If you're looking for some South Indian drama, Aha is unquestionably your best bet.

2. Is AHA only for Telugu movies?

No! Aha not only shows Telugu movies, but it also shows some of the best Tamil movies that you should not miss!

Without a doubt, the Telugu industry has a large fan base centring on its stars, but Prabhas remains one of Tollywood's most popular heroes.