We celebrate Pride month with some of the best lgbtq movies that are open hearted and depict the queer experience breaking serious ground. Check it out! 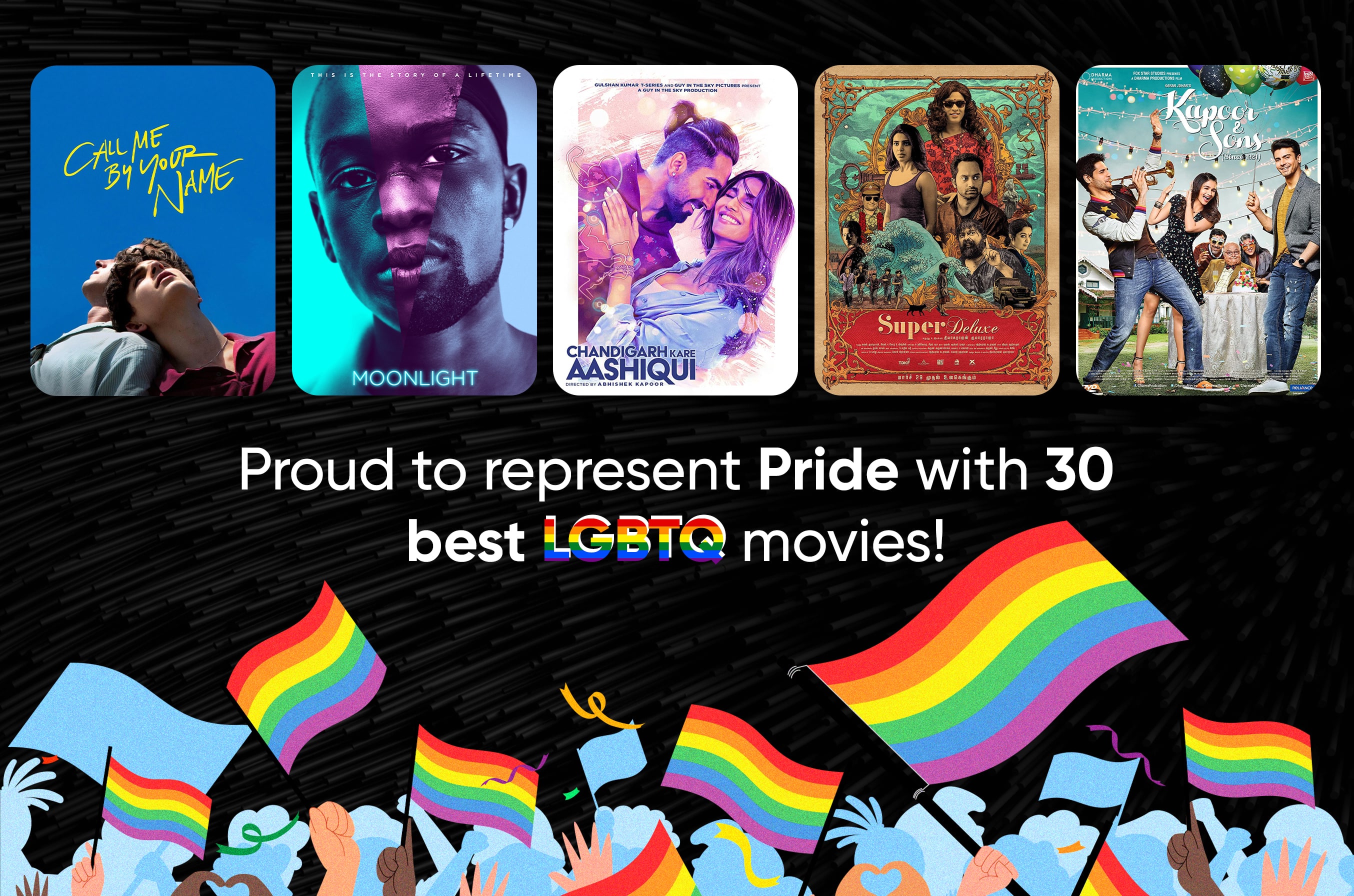 LGBTQ, as we all know, refers to a group of people who identify as Lesbian, Gay, Bisexual, Transgender, Queer, and other sexual minorities. These are people who celebrate their sexuality and diversity together. The main goal of LGBTQ communities is to demonstrate that gender and sexuality is not binary, and that it can and should be diverse. Everyone should have the right to express themselves, as individuals, and choose who they want to be rather than being confined to a set of made-up constructs.

The LGBTQ community have been brave to express and take pride in their identities and should be treated with mutual respect & love. In this article, we'll celebrate Pride month with some of the best collections of LGBTQ movies which  showcase the lives and struggles of the community and what they stand and strive for.

The first film recommendation under LGBTQ movies is Love Simon which is streaming on Disney+ Hotstar, and revolves around Simon, who conceals his sexual identity from his family. However, an enemy of his  threatens Simon that he will reveal his identity to his family, but one fine day Simon's identity is revealed to his family. Will they be able to accept Simon and his decision, no matter how hard they try?

Margarita With A Straw - Netflix

Our next recommendation under LGBTQ movies is one of the best movies ever made that portrays the character of an LGBT individual. First and foremost, the story revolves around a girl who has cerebral palsy and finds love for the first time in her life with a girl, which is a special for her. Discover what happens when she meets her first love.

Blue Is The Warmest Color

The movie we recommend next is Blue Is the Warmest Color, a fairly laid-back movie but delivers a powerful message to the community, as the title implies. The story centers around a French couple who develop an intense sexual and emotional bond with each other irrespective of one being older than the other. The main message of the film is not only in support of all types of love, but also that love knows no age!

A young black man named Chiron is portrayed in the 2016 movie Moonlight as he grows up in the city of Miami. In this movie, his journey towards manhood, his relationship with the community that helped raise him, and his search for his true identity as a queer person are all depicted to deliver a clear, strong message from the LGBTQ community.

Our very own Indian production, Chandigarh Kare Aashiqui, is Bollywood's attempt at promoting LGBTQ stories. It centers around Manu and Maanvi, who share a passionate relationship that abruptly seems to come to an end when Manu discovers Maanvi's true identity and personal history. But later, following a huge drift in their relationship, they appear to understand each other and accept Maanvi's identity.

Our next LGBTQ movie features Vijay Sethupathi, a huge sensation in the South, who portrays a transgender woman and demonstrates the struggles they encounter because of their identities not being accepted by society's binary gender construct. You must watch this film because Vijay Sethupathi has played an excellent role in bridging out a strong message that is dedicated to the LGBTQ community.

Kapoor and Sons is a Hindi LGBTQ movie and also stands as an example for portraying Gay characters. It stars Alia Bhatt, Siddharth Malhotra, and Fawad Khan as three good friends who go through different stages of life and discover who they really are. Fawad Khan plays the role of a gay protagonist who shows how his sexual identity causes him to be neglected by the society.

The Half of It - Netflix

This LGBTQ movie's powerful message is that if you have to love something and find love, you must first fall in love with yourself. It depicts how a young American Chinese girl begins to fall in love with another girl, as well as the chaos and self-identity crisis that follows.

Netflix This next Netflix series is one of the most acclaimed series for teens and millennials alike. It discusses how your coming-of-age years are important for a person’s overall development , and also how differnt individuals discover self-love and sexual intimacy in their own ways.

Elisa and Marcela is a movie set in Spain. It demonstrates how Elisa and Marcela both fall in love against all odds and barriers of society. Elisa, to win her love, transforms into a male identity to marry Marcela. After which, a series of unwanted twists and turns follows.

The following recommendation is currently streaming on Netflix. Brokeback Mountain is about 2 shepherd boys who fall in love and share a sexual and emotional relationship. However, when they marry their respective girlfriends, their lives become complicated, as they struggle to stay true to their identity.

A group of high school students are brought together in the romance comedy Let It Snow, to celebrate Christmas Eve in a tiny Midwestern town. As they get to know one another, they discover that their friendships are merging and evolving into love. But what will happen over time? Watch this movie on Netflix and find out.

I Am Michael - Netflix

I am Michael is a 2015 American film starring James Franco, Emma Roberts, and other actors. The protagonist of the film is a gay activist who comes out as gay and becomes a pastor within the Christian church. Discover the genuine meaning of finding oneself inwardly by watching I am Michael right now on Netflix.

The 1998 film Edge of 17 stars Chris Stafford, Tina Homes and other celebrities. This film discusses how people who experience conflicting emotions are often increasingly unsure of themselves. Additionally, it provides glimpses of high school life and how it might affect later life, if self-discovery is neglected. This is a heartwarming LGBT movie that you must watch!

Another film focusing on bringing forth the true meaning of Pride Month and what it is is, Holding the Man. It depicts Tim and John who fell in love during their high school years and have been in a relationship for 15 years, but because of their separation, it causes them to rekindle their relationship and once again learn everything about each other.

Our next suggestion is the 2016 American drama film Love Song, which centers on Sarah and Mindy as they embark on an impromptu road trip and find their dynamic relationship after only a short period away from their families.

The challenges of a transgender person is the subject of the Tamil film Kanchana. The film is an Indian production that hits the mark in highlighting the diverse experiences transgender people have in reality. It portrays the reality of how challenging it is for transgender people to establish their identities in the Indian society. Watch this Heartwarming LGBTQ movie from the South Side now!

Our next suggestion is a Malayalam film about a transgender man's battle to realize that the social construct that society has been operating on has misread his sexual identity. He also demonstrates how the society in which we live does not accept gender transformation.

Chronicles of Hari is based on Hari, a Yakshagana artist criticized for primarily portraying female characters in his performances. As we all know, Yakshagana is one of the well-known art forms from the South. Hari, a young actor, is driven by his enthusiasm to perform Yakshagana in female attires and ends social taboos.

A Taiwanese romantic drama, Your Name Engraved Herein is based on the characters Jia-Han and Wang, who fell in love with one another despite all social norms. Nevertheless, they decide not to give up on each other and to defy social conventions to find their way back to love.

Next on the list is Disobedience, which is based on Ronit, a young woman who returns to an orthodox community that expelled her as a child after her father's death. She eventually meets her childhood friend and realizes she has feelings for her. Watch this LGBTQ movie and witness a beautiful journey of love!

The World To Come - Amazon Prime

The World To Come is a movie streaming on Amazon Prime that is based on a 19th-century American love story about two farmer's wives who are drawn to each other and share a kind of connection that they've never shared with anyone before. The World To Come is an easygoing romance drama that you must watch if you want to understand the feelings of a lesbian couple.

Maurice is a 1987 British romantic LGBTQ movie about the struggle to fit in with society if you are a member of the LGBT community. Due to the various constraints imposed by society, these individuals are unable to continue their love and face numerous challenges.

Next up is Before Night Falls, which is based on discovering your true identity and not being confined to a specific gender. It tells the story of Arena, a young boy who makes friends with other gay men. However, there is a tragic twist to the story that you must see.

Our next suggestion under LGBTQ movies will make you laugh out loud. Pride is all about preserving gay and lesbian rights in London. Pride demonstrates how activists help to protect and preserve the rights of gay and lesbian communities The cast is fantastic, and every thing about this film captures the true essence of the LGBTQ community.

Imagine Me and You is a British comedy-drama about Rachel, who notices Luce during her wedding ceremony. Over time, they both become true friends, and Rachel learns that Luce is a lesbian. Following this, there is a whole new series of events that you should keep an eye on by watching Imagine Me & You!

The Way He Looks

The Way He Looks is a heartwarming story about Leonardo, a blind teenager attempting to live a normal life. He meets his best friend Giovanna, who becomes his only hope of witnessing the world over time. With Giovanna's help, Leonardo discovers his true identity.

Happy Together is another movie that is currently streaming on Amazon Prime that is based on Lai and his boyfriend Ho, and how their relationship is somewhat disrupted and faces a lot of hurdles. Lai meets another man named Chang, but Chang has his own personal issues, and leaves Lai behind. Will Lai rekindle his love towards Ho again?

The next suggestion is Boy Erased, which centers on Jared, a young man who discovers that he is homosexual and intends to tell his family, but his father sends him to a conversion therapy camp. There, he is subjected to numerous questions that put him under a lot of pressure while also helping him come to terms with who he is.

The Boys In The Band - Netflix

The Boys In The Band, which is streaming on Netflix, is our final pick for LGBTQ movies for Pride Month. A gathering of gay men in 1968 New York City is the basis for the story. The story's major premise is how these people strive to fit in, but it also demonstrates the awesomeness that each of these people have.

As you can see, all of these films have developed a striking and informative new concept that shows various forms of love and perfectly demonstrates that love is love. They no longer center around the same stories from mundane concepts that we see today. Everyone deserves to experience true love, and that is precisely what Pride Month is all about. Let's celebrate Pride Month by viewing all of these films, getting to know our LGBTQ+ community, respecting their choices, and accepting them with all the love they deserve!