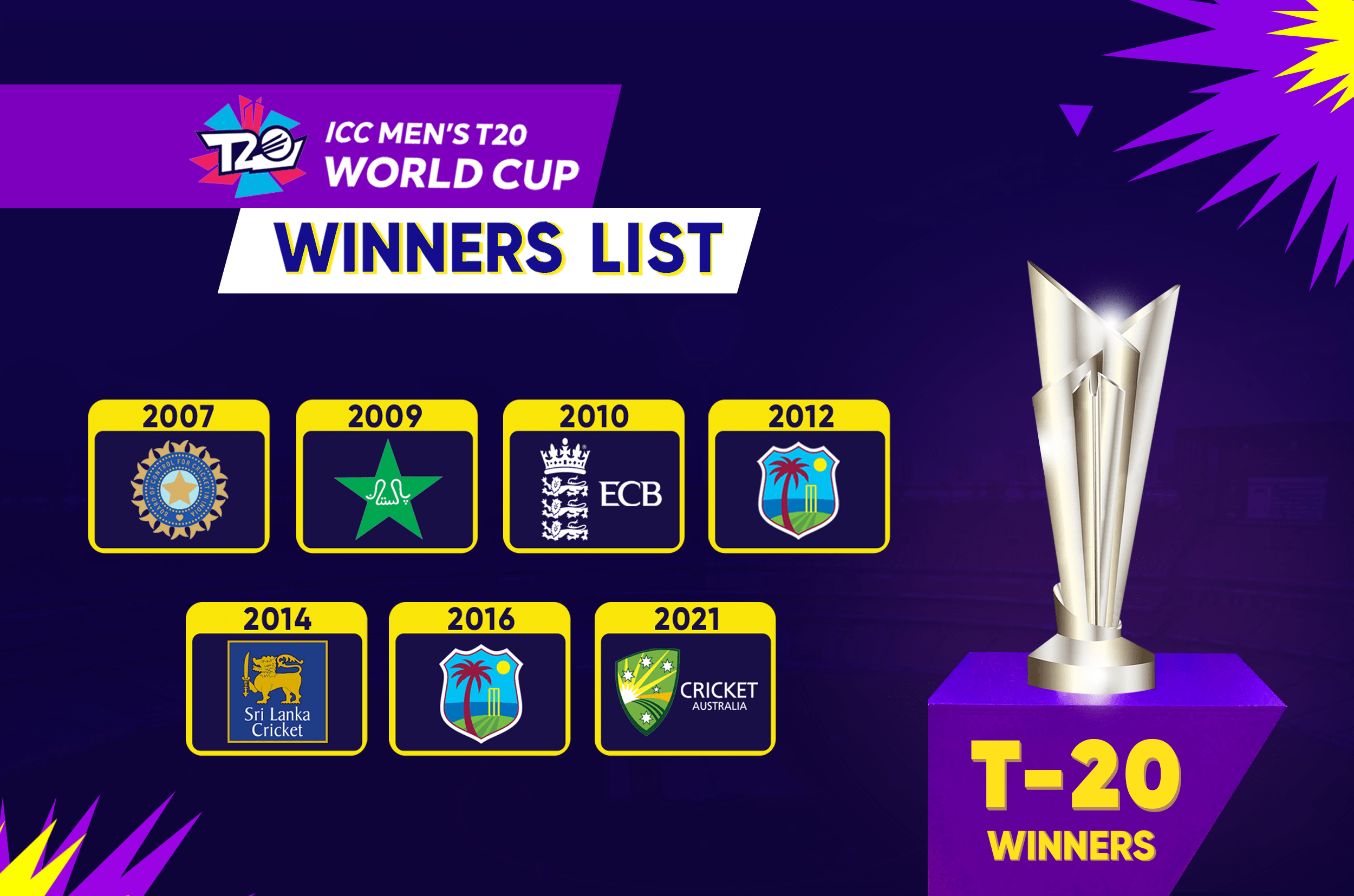 The World Cup is something that instantly boosts every cricket lover's adrenaline. Millions of people are pumped with loud cheers to their favorite teams. This time, it's only going to get bigger and better with the 2022 World Cup, which the entire world is looking forward to. Let's show you the T20 world cup winners to date so that you can learn more about the history of the T20 world cup in all its glory.

India is the undisputed number one under the T20 world cup winners list. 15 years ago, India defeated Pakistan and won the World Cup for the first time. At that time, Dhoni was just crowned as the captain and already won the first-ever T20 world cup that was hosted in South Africa! What made this world cup better is India and Pakistan meeting in the finals. They are known to have one of the biggest rivalries in the world! With no major experiences for the young bulls for both India and Pakistan, Dhoni and his boys in blue managed to prevail victorious as they beat Pakistan in this nail-biter of a game. This was also the beginning of Dhoni’s era!

Next up on the T20 world cup winners list is Pakistan. They were indeed looking for a major redemption and comeback. Pakistan came back much stronger under Younis Khan’s captaincy from their previous World Cup loss. They defeated Sri Lanka by 8 wickets, resulting in a magnificent victory. Umar Gul bagged 13 wickets and became the highest wicket-taker of the series who played a major role in their championship!

Following that, next on our T20 world cup winners list, we have one of the most powerful teams in the cricket industry, none other than England. The 2010 T20 world cup was held on the island of West Indies. The World Cup finally came down to 2 teams, Australia and England who have the oldest rivalry in the history of cricket! But with the brilliant captaincy and strategy of Paul Collingwood, The English team emerged victorious.

West Indies is known for its fast-paced bowlers and heavy-hitting batsmen. In the 2012 World Cup, the West Indies defeated Sri Lanka on their home turf. Yes, we all know that Sri Lanka is one of the most versatile teams in cricket, but the West Indies, with their Caribbean power and strength, showed that they’re no less! Not to forget Marlon Samuels and his outstanding game, which earned him the title of man of the match. Their aggressive style of the game came in handy for the Indies!

Looking at the list, teams come back with a redemption! After falling short to the Indies in 2012, the Lanka lions came back with a high level of determination and motivation. In 2014, Sri Lanka won by six wickets against team India. Lasith Malinga’s fierce bowling and great captaincy gave an edge to the Lanka Lions which helped them win the tournament along with Kumara Sangakara’s brilliant 50 in the finals.

“Carlos Brathwaite, Remember the name” How can we forget those words? We have the West Indies, who reclaimed the 2016 World Cup title by defeating England, which is also one of the strongest cricket teams in the world. As previously stated, the West Indies are a strong Caribbean power when it comes to batting and bowling. The impeccable performance of Carlos Brathwaite and his consecutive four sixes made it look like a piece of cake and bullied Ben Stokes by helping West Indies win their 2nd T20 World Cup. It also became one of the most notable glimpses that will undoubtedly go down in cricket history.

The 2021 World Cup brought the sleeping giants back onto the throne. Yes, it was most certainly Australia’s year. Australia has the most long-form World Cup wins (50 overs) to their name and were yet to take the T20 Cup to their home. They accomplished this feat in no time! They had to face their long time rivalry since World War - I, the Kiwis. They won everyone’s heart but Aussies showed everyone why they’re considered to be the best. Mitchell Marsh’s crucial 77 helped Australia achieve their maiden T20 championship. David Warner was awarded the player of the tournament for his excellent performance throughout the campaign!

T20 is one of the most anticipated and celebrated events for cricket fans. The winning team will undoubtedly go down in history for the skills & persistence exhibited by the entire team. They are praised and uploaded with so much importance and have also been chosen to initiate other matches based on their performance. So it's critical to bring your A-game to every world cup possible. In addition to being worth over a billion dollars, the sport has a lot of respect and eminence on its own and has a special place in people's hearts not only as a sport but also as an emotion. West Indies is one of those teams that has consistently delivered outstanding results over the years and has bagged the most number of T20 titles, winning two tournaments.

We are confident that after reading this blog, you will not want to miss out on another match from this T20 World Cup which is being streamed on Disney+ Hotstar. Looking for best deals on Disney+ Hotstar? Simply download Fleek and with the click of a button, you'll have your subscription with great deals in no time!